WASHINGTON–With the imminent renewal of the Higher Education Act, the legislation governing federal higher education programs, policymakers are wondering which issues will garner support across the aisle. A panel – hosted by the Cato Institute, a libertarian think tank, on Capitol Hill – gave a glimpse into one side of that equation, featuring conservative authors on higher education. 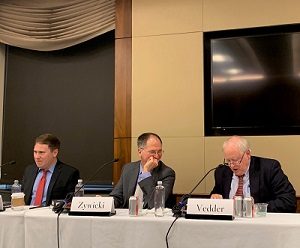 The discussion opened with commentary by Sen. Rick Scott, former governor of Florida. As a low-income student who grew up in public housing, he said college costed him about $200 per semester.

“There’s no reason we can’t figure out how to do this less expensively,” Scott said.

He mentioned a series of bills he plans to file, including measures which would get rid of distinctions between for-profit and non-profit schools, hold higher education institutions responsible for paying a fraction of student loan defaults, cut off schools that raise tuition from federal funding, allow Pell grants to go toward technical schools and reduce regulations for private lenders.

Scott, among others, expressed skepticism about Democratic candidates’ proposals to forgive student loan debt, saying these plans would “bankrupt and destroy” the country if implemented.

“Now the Democrats have a great new solution,” he said. “They’re just planning to make it all disappear. Poof, just like that – cancel all student loan debt. It’s going to be magic.”

Still, panelists expressed a sliver of hope that Republicans and Democrats can come together on aspects of the Higher Education Act to make higher education more affordable.

While Vedder would like to get rid of federal student loans entirely, he said everyone can at least agree the FAFSA form students use to apply for financial aid is “stupid” and needs of reform.

“No one – Democrat, Republican, vegetarian, Presbyterian, whatever your orientation is – agrees it makes any sense at all except for a few bureaucrats,” he said.

Vedder thinks Democrats could also get behind Income Shared Agreements, student loans supplied by universities themselves, and “skin in the game,” which refers to policies that reward or penalize schools based on whether students can graduate and repay their loans. However, these policies may struggle to pass, he said, because they’ll burden schools with low retention rates like historically Black colleges and universities, which he described as “politically very sensitive.”

Zywicki agreed that “skin in the game” policies may prove themselves more complicated, but for different reasons.

“If you want to think about how higher ed will respond, put on the cap of the most sociopathic Wall Street banker who only cares about money,” he said.

He worries these measures will disincentivize colleges and universities from enrolling low-income and minority students, who tend to graduate at lower rates.

The bulk of the discussion focused on why tuitions have become so costly.

Magness blamed higher education’s “frivolous expenses” with universities using “fancy” campus infrastructure like rock climbing walls or lazy rivers to compete with each other. He also pointed to “administrative bloat,” arguing colleges and universities are over-investing in disciplines which attract less students, like the humanities, and creating administrative offices that aren’t strictly necessary. The example he gave was an officer of environmental sustainability.

Among other issues, Zywicki blamed accreditors for limiting consumer choice and politicians’ “bizarre war on for-profits,” schools more heavily regulated under the Obama administration for graduating students unable to repay their loan debts at high rates.

“Private enterprise has been a miracle in every other industry,” Zywicki said.

While many factors contribute to colleges’ high cost, according to Vedder, the federal government is largely to blame because student loans enable colleges and universities to raise their prices.

“Being in this building, in this place – ” he said, gesturing to the Rayburn House office building, a five-minute walk from the U.S. Capitol, “ – we are right at the epicenter of the problem.”