WASHINGTON – Kelly Finlaw, a middle school art teacher at I.S. 128 in New York City, thought she qualified for Public Service Loan Forgiveness (PSLF), a federal program that forgives student loans for public servants with 10 years of on-time payments. Her loan servicer at the time told her she was on track for the program every year for a decade.

But in 2017, her application was denied.

“I need to resign myself that I’m going to die with this debt,” Finlaw said. “This program was supposed to protect me. I needed to be protected from this program.” What happened to Finlaw isn’t uncommon. Many public servants have worked toward loan forgiveness under this program, only to find out they’re ineligible ten years later.

“If a student applies and is denied, it’s normally the student’s fault. But if 99 percent are denied, it’s the program’s fault,” said Chairman Rep. Bobby Scott D-Va. “These aren’t puzzles or contests. This is a program you’re supposed to benefit from, and having all these hurdles and barriers is just totally unreasonable.”

Committee members could agree that the program failed its intended goal, to encourage people to work in fields like healthcare and education. But in their questions to witnesses, they remained divided on who’s to blame – largely along party lines.

Some pointed to the Pennsylvania Higher Education Assistance Agency, or FedLoan, the only servicer for the program, and the Department of Education for neglecting to monitor them more heavily.

Witness Yael Shavit – an assistant attorney general in the Massachusetts Attorney General’s Office – said FedLoan has misinformed borrowers like Finlaw, miscounted their payments and delayed their applications, and the Department of Education hasn’t acted “despite being aware of these problems.” Her office is currently suing FedLoan for “financial harm to thousands of Massachusetts residents seeking to rely on the PSLF program.”

“In short, the system is deeply broken,” Shavit said. 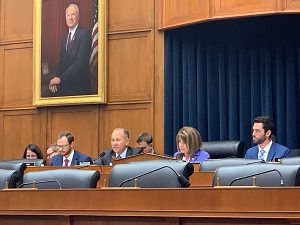 Rep. Lloyd Smucker, the committee’s ranking member, said the problem isn’t the Department of Education but the Obama-era program it’s asked to enforce, because the requirements are too confusing. Only direct loans are eligible for forgiveness, borrowers have to be on an income-driven repayment plan and only employees at non-profits or government agencies are eligible, excluding other kinds of public servants like nurses at for-profit hospitals.

“The Department of Education is following what is a very complex law – in fact as written by Democrats,” he said. “It’s just not the law Democrats wished they had passed in 2007.”

Witness Dr. Matthew M. Chingos, vice president for education data and policy at the Urban Institute, said the program is in fact “complicated” and “subsequent changes made by both the Obama administration and Congress have made it even more complex.”

While it’s important to provide “more and better information” to borrowers, “we need to think, ‘Can we make these programs better?’” he said.

But witness Melissa Emery-Arras, director of education, workforce, and income security at the Government Accountability Office, said the Department of Education isn’t off the hook. It’s the department’s job to make sure borrowers are accurately informed, even if the legislation is complicated.

“Any confusion at the level of the borrower relates to outreach by the department,” Emery-Arras said. “If people are applying for programs they’re not eligible for, it’s because they’re confused, so it’s really important that the department helps them understand what the requirements are.”

Jeff Appel, director of policy liaison and implementation at the Department of Education Office of Federal Student Aid, said the department “taken an increasing number of steps” to offer clear information to borrowers in accordance with recommendations in a 2015 Government Accountability Office report. For example, he described the PSLF Help Tool, which guides public servants through the eligibility requirements online, and the Next Gen Initiative, which will offer additional digital tools for borrowers.

“We’re trying to use social media to a large degree to try and reach the broadest audience that we can using the most current communication tools and methods,” he said.

Rep. Mark Takano said the Department of Education’s inaction reflects the Trump administration’s lack of commitment to the program. None of the president’s annual budget proposals included funding for the Public Service Loan Forgiveness program, and the PROSPER Act, a Republican proposal for renewing the Higher Education Act, also removed the program.

“From where I sit, it’s evident this administration is trying to sabotage this program,” Takano said.