When Arlin Tellez crossed the Rio Grande River with her mother, she kept something nestled in her hand, a prayer card with a picture of the baby Jesus that her grandmother gave her the day before she left Mexico for the United States. 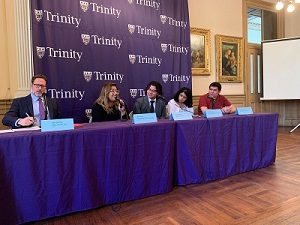 Now the prayer card sits in her dorm room at Trinity Washington University, where Tellez is a sophomore.

Tellez and three other undocumented students from Catholic colleges in the Washington D.C. area spoke on a panel called “Undocumented & Unafraid: Student Activism in the Era of Deportation,” hosted by Trinity Washington University and Faith in Public Life, a network of religious leaders for social justice causes.

“We must restore the once large heart of the United States in welcoming those who sought help and hope in this nation,” McGuire said. “What’s happened in the last three years is disgraceful, even sinful.”

With prompts from moderator John Gehring, Catholic program director for Faith in Public Life, panelists shared their immigration stories and explored how faith impacts their activism as undocumented students.

For Tellez, her church was the first community to give her a sense of belonging in the U.S., she said. Now her “identity as a Catholic woman” helps to drive her organizing work.

In 2017, Tellez graduated high school in North Carolina, a state that doesn’t offer in-state tuition to undocumented students. Even with scholarships she couldn’t afford college. When the Trump administration rescinded DACA that same year, her religious community connected her with United We Dream, where she started organizing. She also advocated for tuition equity in North Carolina with Students for Education Reform. 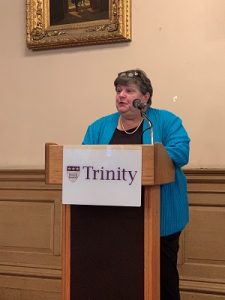 Religion also links Tellez to the home she left and cannot visit.

“My religion is not just my faith,” she said. “It’s something cultural. I feel like it’s my only connection to my family in Mexico.”

Daniela Zelaya, a senior at Trinity Washington University, also found a home in her evangelical community in Silver Spring, Maryland, where her family settled after leaving El Salvador.

She lived a life of relative stability until last year when ICE raids happened in the area, she said. Now Zelaya’s family talks about what would happen if her parents were deported, how she would support her little brother with Down’s Syndrome and her little sister. But Zelaya’s church and her parents’ faith provide some comfort.

“Throughout their journey, they found God,” she said.

Others found comfort and community elsewhere. Mizraim Gurrero, a senior at Georgetown University, felt that sense of belonging when he connected with other undocumented activists in high school, after his father was released from a Texas detention center. Now Gurrero is an active member of UndocuHoyas and Hoyas for Immigrant Rights.

José Gutiérrez, a senior at Catholic University, described himself as agnostic but said he has his own set of beliefs that give him hope.

Feeling that hope isn’t always easy for Gutiérrez. He’s been struggling with depression for five years, he said, weighed down by the realization that he could “keep grinding through these obstacles” only to get deported. Gutiérrez is majoring in history with minors in Islamic world studies, French & Francophone studies, and Latin American & Latino studies, plus an honors sequence in philosophy. He wants to earn a doctorate in Latin American history one day.

Sometimes “there’s this feeling of dragging your soul around,” he said.

Other panelists could relate. When asked to describe their experiences as undocumented immigrants in one word, Gurrero said “bittersweet,” Zelaya said “fear,” and Tellez, who’s considering self-deportation, said “trash.”

“I think there’s this narrative that migration is beautiful,” Tellez said. “But it’s not. The trauma we have to go through isn’t beautiful.”

Gurrero also emphasized the importance of not oversimplifying undocumented immigrants’ stories. Dreamers, beneficiaries of the DREAM Act, are often framed as “the model undocumented person,” he said, straight-A students who make it to college without any run-ins with law enforcement. But many undocumented immigrants “don’t fit this mold” in a country with “heavy criminalization of Black and brown bodies.”

As an aspiring immigration lawyer, he wants to “uplift the stories of those who don’t fit the Dreamer narrative,” he said. “Everyone deserves to be in this country and everyone deserves a dignified life.”

Panelists suggested ways that universities and religious institutions could help them in their advocacy.

Zelaya herself wants to be the first Latina U.S. Secretary of Education.

“As people of color, as undocumented people, we not only need to be the ones at the Congressional offices chanting and lobbying,” she said. “We also have to be the people being lobbied.”