WASHINGTON- For the second year in a row, a select group of undergraduate students got a first-hand chance to learn about international diplomacy through a program sponsored by the U.S. State Department.

The students visited internationally focused government and non-government agencies to learn about various career opportunities available in foreign affairs as part of the Cox-State Department Diplomacy Seminar. The nonprofit Una Chapman Cox Foundation partnered with the Close Up Foundation and the State Department to cover the costs for students.

“This program is about increased awareness of the opportunities available to them at the state department, foreign service in particular and exposure to Washington D.C.,” said Meredith Polm, curriculum design and program development specialist at the Close Up Foundation.

The theme of this year’s professional development program was “Why Diplomacy Matters” and over 500 students applied for only 27 coveted spots. 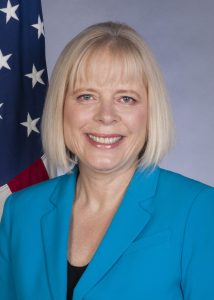 Last week, the students listened to stories and advice from ambassadors, detailing their abroad experiences. Many of the students held dual citizenships, were majoring in international studies, had parents who worked in public service or came from immigrant families. When asked how many spoke a second language fluently, a majority of the group raised their hand.

Carol Perez, director general of the foreign service and director of human resources at the State Department offered advice to the students and described the agency’s recruitment process.

“Mentors are wonderful but you need sponsors,” she told them. “They have the vision to see something that you don’t see in yourself and they have the power to get you there. The key are sponsors.”

As the first female U.S. Ambassador of Chile, Perez was asked about her experience as a woman in a mostly male-dominated field. Admittedly, Perez said that at first, she didn’t want her gender to define her but added that being a woman has provided her “an incredibly powerful voice to talk.”

“Don’t hide from it,” she said. “Embracing it and find a way to channel it is key.”

Former U.S. Ambassador of Iceland and Diplomat James Gadsden and Principal Deputy Assistant Secretary in the Bureau of Western Hemisphere Affairs at the Department of State Julie Chung discussed the obstacles and discrimination they faced throughout their careers.

“Having started young, sometimes it has been a challenge,” Chung said. “I would walk into a room and people would say, ‘are you the note taker? Are you the secretary?’ You have to be assertive but not offended by it.”

Additionally, Gadsden advised students to not let others place them in a country connected to their ethnicity, unless desired.

“You are a representative of the United States and all of its people, not your ethnicity,” he said.

After hearing from Chung and Gadsden, students participated in a diplomacy seminar focused on an international migration crisis. Lauren Fischer, education program specialist for the United States Diplomacy Center at the Department of State, led the discussion and divided the students into groups to play their assigned roles. 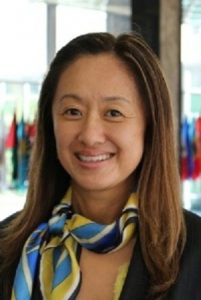 The simulation topics were chosen based on student’s backgrounds. Last year, many were criminal justice majors so the theme focused on counterfeit goods.

“It’s impressive to watch these students, the outcome is different each time I watch it,” said Nicole Brzozowski, program manager at the Cox Foundation.

At the end of the hour and a half long simulation, the students told Fischer the experience was “intense.”

“I’m heartened to know that you are our future leaders,” she said.

From last year’s feedback, Polm found that for the students who had little knowledge about state or foreign service, they saw it as a potential career after participating in the seminar. Additionally, for those who had previous knowledge about the subject, the program made it more real for them as they saw that their “dream job was attainable.”

“When you see how much students get out of this, you wonder why more organizations don’t do something like this for a more diverse group,” Polm said.

Brzozowski said that the program is beneficial because it is “person-centered.”

“Anyone can go online and Google but when the students hear about how many entry points there are and hear stories from diplomats, they can see themselves in these careers,” she said.

Lino Gutiérrez, executive director of the Cox Foundation and former U.S. Ambassador of Argentina and Nicaragua, stressed the importance of networking. 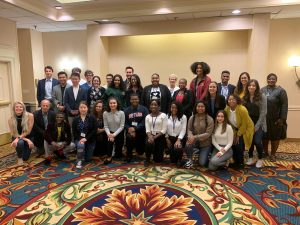 “This is not only a one-time experience, these connections made can be for the rest of your career,” he told the students.

This semester, she is interning at the Congressional Hispanic Caucus Institute and said that the seminar would give her perspective into potential career paths.

“This program gives the side of foreign service,” said Gurdian, a political science and international studies major. “Currently, I’m trying to figure out my future and this allows me to learn about all of the career opportunities out there.”

That comes as welcomed news for the organizers.