Foundation President and Historian Wants to Make the Humanities Accessible

Dr. Andrew Delbanco wears two hats. He’s the Alexander Hamilton Professor of American Studies at Columbia University, where he teaches history and literature. And he’s the newest president of the Teagle Foundation, which gives out grants to further liberal arts education. 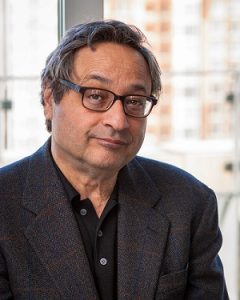 For Delbanco, his role as a historian and his work at the foundation largely go hand in hand. In both positions, his goal is to engage students in the humanities, which helps them “know about the past as well as the moment in which they live,” he said.

Delbanco came to the Teagle Foundation presidency last year with many accolades. In 2001, Time named him “America’s Best Social Critic,” and he earned a Great Teacher Award from the Society of Columbia Graduates in 2006. In 2012, President Barack Obama gave him the National Humanities Medal. Meanwhile, he served on the Teagle Foundation Board of Directors starting in 2009. A prolific writer, Delbanco has published a wide range of books, including a volume on higher education called College: What It Was, Is, And Should Be.

His most recent work is The War Before the War: Fugitive Slaves and the Struggle for America’s Soul from the Revolution to the Civil War. The book, published last year, describes the journeys of fugitive slaves as well as the ethical debates surrounding the enforcement of the U.S. Constitution’s Fugitive Slave Act.

“Understanding the past is important for behaving responsibly in the present,” he said. “Working on The War Before the War made me see more clearly than I had understood before that American history is a totally different matter for Black people than it is for White people. Writing this book was an act of self-education.”

While the Teagle Foundation doesn’t exclusively focus on students of color or low-income students, Delbanco’s work aims to ensure humanities education is available to all, not just students from privileged backgrounds or selective institutions.

For example, the Teagle Foundation supports the Freedom and Citizenship program, which brings local low-income high school students to Columbia University for a rigorous summer seminar in American Studies. With the foundation’s help, similar programs will begin at other universities, including Yale University, Ursinus College and University of Rochester.

Delbanco is also focused on programs that bolster the humanities at community colleges. He sees “a gross discrepancy” between the resources at more selective institutions and those at open-access public colleges, which educate the highest number of low-income students.

“To say that higher education doesn’t participate in the inequity in our society would be a generous distortion of reality,” he said.

The Teagle Foundation works to tackle that inequity, though it isn’t large. It has a five-person staff and approximately $5.5 million in grants to give away. It funds initiatives with the hope that other funders will be inspired to get involved, sustaining programs beyond the length of their grants.

“If you show something good to the world, people will want more of it,” Delbanco said.

For Delbanco, a humanities education is something good – for everyone. Low-income students might not think of the humanities as a viable option for them, he said, but every student deserves and can benefit from “reading challenging books” and “engaging in spirited debate with their peers.”

“I’m not interested in browbeating people who have understandable concerns about college cost and post-college employment to become English majors,” he said. “What I am interested in is to ensure that all students, not just those at privileged schools get some degree of liberal education, that they get the chance to reflect on large questions, questions of identity: Who am I? What freedoms do I have in determining who I want to be? What are my opportunities and obligations as a participant in a democracy?”

That message impresses his friend and colleague, former Teagle Foundation President Dr. Judith Shapiro. She describes Delbanco as a “public intellectual” with “a true deep love for the liberal arts” and a “focus on civic education.”

“If there could conceivably be a more important moment in the state of affairs of our country to focus on civic education, it’s hard to think about what it is,” she said.

In a polarized time, Delbanco sees great value in disciplines like history and literature where students can have discussions with no single right answer.

“As a teacher, I think of myself as being in the confusion business,” he said. “Students – not just students but all kinds of people at all stages of life – tend to have very clear views of what’s right and what’s wrong, who’s on the good team and who’s on the evil team, and end of story … We all have a limited appetite for complexity, yet life, whether we like it or not, is complicated.”