What I Learned from The Vagina Monologues - Higher Education

One of the proudest accomplishments of my undergraduate experience was my involvement with the V-Day Movement that produces The Vagina Monologues every year. Freshman fall, I joined this organization whose mission is to “end violence against all women and girls (cisgender, transgender, and those who hold fluid identities that are subject to gender-based violence).” I loved performing, and ending sexual violence was an issue that I have always been passionate about, so V-Day and VagMons were the perfect fusion of those two interests.

After performing heavier monologues on topics of rape and revolution during my freshman and sophomore years, I was cast to perform “The Woman Who Loved to Make Vaginas Happy” in my junior year. We all called it “The Moaner” for short. This piece was figuratively and literally the climax of the show in which the narrator, a self-described “sex worker who only had sex with women,” discussed her love for moaning and making other women moan. The piece culminated in an over-the-top “triple orgasm moan.”

I never considered myself to be an overtly sexual person. On the contrary, I was rather private and felt uncomfortable in my own skin. The idea of very vocally simulating orgasms on stage was terrifying enough, but to do that confidently while over a thousand people watched was unimaginable. I nearly dropped out of the role on multiple occasions. I had to collect myself and recall why I was involved in the organization to begin with. 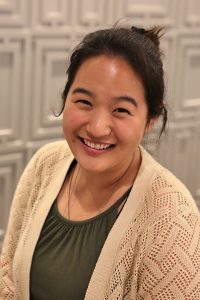 I was a part of V-Day to end gender-based violence. That meant educating people on issues of consent. It meant advocating for survivors. For me, it also meant implementing different aspects of my identity to purposefully act as an agent of change. The intersection of two of my most salient identities—being Asian American and a woman—was never satisfactorily depicted in American culture.

In fact, I was exhausted by the lack of representation of Asian Americans in the media. I was frustrated that in the rare instances where Asian women were represented, they had nameless roles and were portrayed as temporary, submissive love interests to ultimately remind the male protagonist that his true love was his quirky, White childhood best friend. Otherwise, they were hypersexualized as geishas or prostitues or the exotic foreign exchange student. In nearly all situations, Asian women had no agency over their own sexuality, regardless of what end of the spectrum they were on. My frustration with this fetishization and objectification finally trumped my personal fears and discomfort.

I knew that being on that stage as an Asian American woman who was in complete control of her sexuality was something that people needed to see. This was an opportunity, a platform, to portray an empowered woman who was not encumbered by the male gaze. I felt the need to perform the piece because no Asian American woman had ever performed it at my school. So, in front of a thousand people, I moaned. The response I received was incredibly affirming and rewarding.

The following year, I was the director of the show. While anyone can be a part of the V-Day, the number of performing roles was limited. I made it clear to my producer that acting ability was a lower priority when casting roles. It was much more important to hear why someone wanted to be a part of V-Day and what the Movement meant to them. Thankfully, I was working with an amazing producer who was on the same page. Our casting choices were deliberate, especially because we knew that VagMons has a history of being a predominantly cis, White space.

The year I directed the show was the first year we had a majority of people of color on stage. VagMons had been performed at my school for nearly two decades, but this was the first year that we had trans and nonbinary folx represented in the cast. Still, I was frustrated because this was not nearly enough.

The Vagina Monologues has been critiqued throughout the years for being dated and trans-exclusive. While it was revolutionary for its time, equating “vagina” with womanhood is antiquated and ultimately harmful for the trans community. Additionally, none of the monologues discuss campus sexual assault—an issue so pervasive and pertinent in today’s culture.

I wanted the voices that have been silenced to be heard. So, I tried to incorporate original monologues written by students into the show. Unfortunately, this was shut down for fear of copyright and legal issues. We found a compromise by having an original monologue printed in the programs we handed out. Despite these obstacles, the show was a success, and we raised $30,000 for Women Organized Against Rape (WOAR), Philadelphia’s only full-service rape crisis center.

A couple years later, I sat in the front row of my alma mater’s auditorium as I watched The Vagina Monologues for the umpteenth time. I could feel myself beaming as I saw the director and producer introduce the show. I had first cast them into the show years before and now, they were leading the Movement. I was so proud of them. I congratulated the director after the show, and we shared a long, tight hug. I tried not to get emotional when she told me that she was there, directing the show, because of me.

I told her I was so proud, and I left that conversation smiling. Our talk made me realize a few things. First, growth takes time. My frustrations with the organization as an undergraduate were not in vain because they were steps in a sequence that is continuously evolving into something greater.

Second, success manifests itself in different ways. Our production of The Vagina Monologues is one of the oldest collegiate productions in the nation. I never would have expected that the end of its tenure would make me so happy. But I truly was happy, because something new and better would be taking its place.

Finally, and most importantly, intentionality is key. Deciding to perform a piece, casting roles, selecting course materials, hiring faculty, implementing institutional goals… We have to be intentional about our choices. Our deliberate decisions can affect every single thing if we want them to, and we impact as much or as little as we choose. I wouldn’t be so arrogant as to say that my choices are the reason why The Vagina Monologues is changing at my alma mater. However, I do know that my intentional choices had some positive impact, which is infinitely more than had I done nothing at all. The best approach to creating a more equitable, inclusive campus is to be intentional and purposive about fostering that environment.

Pearl Lo is a PhD student at Rutgers University-New Brunswick.