The University of Northern Iowa (UNI) will receive a $10 million donation from 1981 alumnus David Takes and his wife Karen Takes, The Gazette reported.

The funding, which UNI President Mark Nook called “critical” to the school, arrives at a time when Iowa universities face steep drops in enrollment and waning state funding. This year The Gazette reported that UNI experienced its lowest enrollment numbers in 43 years. 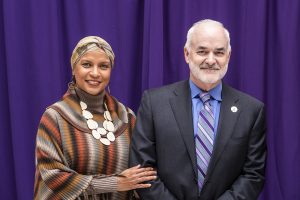 According to the school’s news release, the $10 million will go toward benefiting a number of programs, such as the Takes Endowment, which was established in 2015 to give business students access to international experiences and, thus, boost their cultural intelligence.

A globally aware and diverse workforce is especially pertinent to Iowa, which exports more than $1 billion in food and industrial machinery each year.

The gift will also support UNI’s mascot program, as well as future capital projects such as the Gallagher Bluedorn Performing Arts Center and the Industrial Technology Center.

Takes, a current member and past chair of UNI’s Foundation’s Board of Trustees, is president and chief executive of Doerfer Companies which manufactures and markets products to aerospace, electronics, health care and energy customers.