While the United States is largely considered an international leader in higher education, when it comes to access, diversity and affordability, college officials in the U.S. may want to take a closer look at the kinds of bold education reforms that this country of nearly 2.7 million people has implemented.

It’s an effort to reposition the Arab country known for its breathtaking skyscrapers and modern architecture, as a key player in educating its citizens and those from nearby countries. Some of those efforts were on display this week at The Wise Summit, where more than 3,000 educators, policy makers and social activists gathered in the country’s capital—Doha—to exchange ideas, experiences, and perspectives on what quality education is, what it means, and how it must sustain and evolve into the future.

The three-day gathering, founded by Her Highness Sheikha Moza bint Nasser a decade ago, has emerged as a destination for education reformers, drawing in stakeholders who share a basic belief that a quality education from kindergarten to college should be a necessity for all.

This year’s theme, “UnLearn, ReLearn: What it Means to be Human,” asked participants to share best practices, particularly those focused on innovation in education. 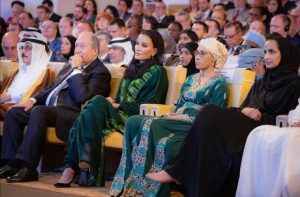 To that end, the Qatar Foundation for Education, Science and Community Development—a nonprofit organization—touted its Education City, an ecosystem that houses multiple educational and research institutes including nine universities from the United States.

The benefits of such an arrangement are enormous, particularly at a time when international study and travel to the United States has started to wane during the Trump presidency. Additionally, international students who attend a college or university in the United States are not eligible for financial assistance. That’s not the case if they attend one of the campus institutions in Doha. The government provides funding—up to a full-ride—for students who have a financial need.

These satellite campuses offered a niche major. For example,  Northwestern—known for its renowned journalism program— offers a major in journalism.  Georgetown, known for its prestigious School of Foreign Service, offers courses in this academic discipline. Qatar students earn a college degree from the institution but they can also take classes at the other universities.

Muhammad Hassan of Pakistan enrolled at Northwestern University in Qatar back in 2014 and graduated last year with a bachelor’s degree in media studies. He now works for in protocol and visitor relations for the Qatar Foundation.

“This is a unique model,” said Hassan. “A student can complete an entire cycle from K-12 to Ph.D.on the same campus.”

He added that the focus on research, and science technology has made the campus community—which first started in 1995—has made The Education City an international model that other countries might replicate.

“The program is as rigorous and as intense as studying in the U.S.,” said Hassan, who did spend the spring semester of 2017 in Evanston, Illinois at Northwestern’s main campus.

Currently, The Education City has students from 94 countries.

While there are other colleges and universities in Qatar, including Qatar University, Community College of Qatar, Doha Institute for Graduate Studies, and Qatar Aeronautical College, Qatar Foundation officials said that luring well-known U.S. colleges to the nation has made educational opportunities accessible to their population of students.

Additionally, Hamad Bin Khalifa University, a relatively new public university located within The Education City was founded in 2010 and graduated its first class of students in 2014. Currently, about 700 students attend the university. 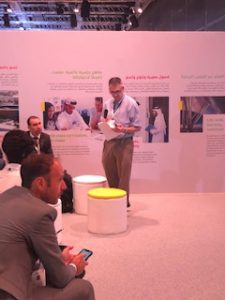 Professors from each of the U.S. institutions are hired and offered a renewable three year contract and hold a teaching appointment exclusively at the Qatar campus.  Dr. Jeremy Koons, an associate professor of philosophy at Georgetown University in Qatar is one of two lone philosophers who teach at the Georgetown Qatar campus. The experience, he said, has forced him to interact with colleagues from other institutions instead of remining isolated in a single department.

“I used to hang out with philosophers,” he said. “Now, I get to spend time and do research with economics and I can walk across campus to work with them.”

That kind of innovative collaboration and interdisciplinary research can be useful and productive, said Koons.

Other topics during the first day of the Summit focused on harnessing neuroscience to optimize holistic learning and a panel that explored new models in higher education that included Dr. Astrid S. Tuminez, the president of Utah Valley University.

Tuminez said that her institution has implemented project-based learning for student innovation and technology. She challenged the idea that colleges and universities do not teach their students valuable skills.

Still, the future, she said, rests in making colleges and universities more inclusive and prepared to meet the growing needs of nontraditional age students who want to earn a college education.

Just The Stats: A Closer Look At STEM Majors

Here is a complete look at the work of these two subcommittees: