Syracuse University Struggles to Respond to Slew of Racist Incidents

Syracuse University faced a slew of racist and anti-Semitic incidents this month – at least 12 instances of slurs and threats on campus – leading to a spike in student unrest. 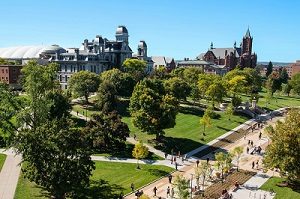 Additionally, a group of students yelled the N-word at a Black student as she left the Alpha Chi Rho frat house, leading to the fraternity’s suspension and the suspension of all fraternity activity. An email with anti-Semitic language was also sent to a faculty member.

Campus climate for students and faculty of color remains tense.

A Syracuse University student – Kym McGowan, 18 – was arrested on Thursday for graffiti in support of students protesting the series of racist incidents. She was arrested in connection with four instances of graffiti and charged with two misdemeanors, fourth-degree criminal mischief and marking graffiti.

“It just kept coming,” she said. “For someone who’s trying to get a handle and trying to take care of others and make sure everyone gets what they need, it’s just been a lot.”

She’s been working with faculty on how to talk with their students about racism on campus, creating a cheat sheet of dos and don’ts for faculty members to use for reference.

“Most of our faculty aren’t comfortable in that gray area,” she said.

She’s also trying to help students get off campus early for Thanksgiving break. The school normally has buses for students going to major cities for the vacation, but transportation home has been in extra high demand. She described campus as “eerily quiet” by Wednesday.

According to students, some parents insisted their children come home because of concerns about safety.

At moments like this, “you want to get to a place where you know and feel comfortable,” Ducre said.

Meanwhile, protests emerged on campus with a sit-in that lasted over a week, occupying the Barnes Center. A group of students – which calls itself #NotAgainSU – condemned the university’s slow response and made a list of 19 recommendations to the administration, including expulsion for anyone involved in the racist incidents, more counselors from marginalized backgrounds and diversity training for staff and faculty.

Ducre described the sit-in as a “great atmosphere” with a lot of “energy.”

“We really did come together as a community in many ways,” she said, in spite of “horrors of it and divisiveness of it.” 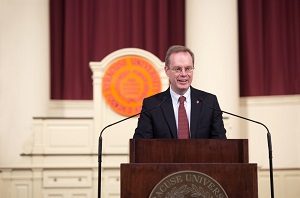 On Thursday, Chancellor Kent Syverud agreed to a lightly edited version of the students’ demands. However, #NotAgainSU released a statement afterward calling for Syverud’s resignation.

“We have remained firm and stated numerous times that we will not compromise on student’s safety and wellbeing,” the group wrote. “… His administration’s mishandling of the numerous racist and bigoted incidents that occurred over the past two weeks solidifies our lack of confidence in this administration to follow through with our demands.”

“We are proud of the way the students peacefully protested and communicated with our leadership team,” he wrote in a statement to Diverse. “They raised real concerns, we have listened and will continue to work toward the thoughtful, forward-thinking and constructive solutions offered by our students.”

Just like the rest of society, universities like Syracuse are struggling with “racism and hate,” he said, so they have the potential to be incubators for change.

“By finding spaces where the intersection of identities is recognized and valued, universities are also places where we can create models for dealing with these larger societal issues that can move our communities forward in addressing historical injustices and inequities,” he wrote.

Ducre is “hopeful” the campus community will start to heal in the coming semester and is especially “happy and encouraged” that the chancellor signed off on the students’ demands. But she also knows it won’t be easy.

“While the vandalism may be over, there’s still a lot that needs to be done to signal and to build that trust again,” she said. “Because the trust has been broken. But they have a map, they have a pathway, to reestablish that trust. And I hope they do it. Because everyone is watching.”