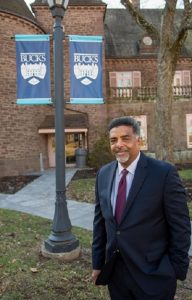 Antoine holds a bachelor’s degree from the University of Southern Mississippi and a juris doctorate from the College of William & Mary School of Law. He also served in the United States Air Force.

“My role is to serve as the campus’ institutional liaison for diversity, equity and inclusion, and continue to build on the efforts that [Bucks President Dr. Stephanie Shanblatt] and the college have started,” said Antoine. “Some of the positive steps Bucks has already taken include a recent campus climate survey and identifying the need for a strategic diversity plan.”