The City University of New York (CUNY) on Monday named Dr. S. David Wu the president of its Baruch College. Wu, who will assume office on July 1, will be the first Asian American leader of a CUNY college.

A scholar in systems engineering and operations research, Wu is currently the provost and executive vice president of George Mason University. 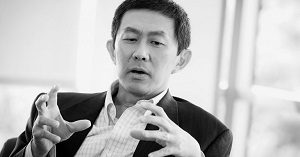 “As an immigrant, this speaks to me personally, and I am excited to play a part in shaping the next chapter of Baruch’s legacy,” Wu said to George Mason University’s newsletter, The George. He further told Diverse that he owes a debt to public higher education in the U.S. as “it has provided me with a kind of perspective and insight needed to succeed.”

Dr. Felix Matos Rodríguez, CUNY’s chancellor, also noted that Wu will be the first Asian American leader of a CUNY college. He said the institution is proud of “the historical significance of his appointment.”

Wu said he feels privileged to be the first Asian American college president in the CUNY system, especially because CUNY is so diverse. More than 75% of CUNY students are Latinx, Black or Asian. And 41% of Baruch’s total student enrollment is Asian or Pacific Islander.

Baruch’s president-elect said it’s important that there is a broad representation of communities, whether Asian American, Hispanic or Black, at a university’s leadership level.

“The symbolism of having both fair and broad representation … is a signal to the diverse student population that they can achieve whatever they want to achieve, so to have that symbolism is important,” Wu said.

Both of these appointments are vital for higher education because university leadership should reflect the changing demographics and increasing diversity of college students, said Dr. Lynn Pasquerella, president of the Association of American Colleges & Universities.

“It’s critically important that we have visibility of leaders of color in academia and these appointments are more important than ever in sending a message that we need to diversify at all levels of the academy,” said Pasquerella. “Only 17% of college presidents are from underrepresented groups and Asian Americans are particularly underrepresented. CUNY and Rutgers are leaders in teaching and the future of higher education, so these are critically important appointments.”

For Dr. Ebony McGee, associate professor of diversity and STEM education at Vanderbilt, Wu’s and Holloway’s appointments are to be celebrated.

“This is so incredibly important because one institution can be a change agent for what we think of as diversity with relation to equity and excellence,” said McGee. “We see such a difference when a person of color is leading even a single department. It can make a huge transformation, so imagine an appointment like this (Wu’s) at an institutional level.”

Wu has both the academic and administrative chops, said both CUNY and George Mason.

He has served on various national and international boards, such as the National Science Foundation and the Science Foundation of Ireland. He’s also on the board of Dartmouth College’s Thayer School of Engineering. Wu has M.S. and Ph.D. degrees in industrial engineering from Pennsylvania State University. He earned a bachelor’s degree in science from Taiwan’s Tunghai University.

“Dr. Wu brings an impressive record of academic leadership and vision to the university. Baruch will benefit tremendously from his skills, energy and insights,” said CUNY chancellor Matos Rodríguez.

Anne Holton, interim president of Fairfax, Virginia-based George Mason, said in the university newsletter that Wu has been an “extraordinary partner” during her period of transition as leader of the state’s largest public research university. As the school’s provost and executive vice president, Wu oversees an annual budget of $1.3 billion.

At Mason, Wu elevated multidisciplinary academic and research collaboration. That led to the creation of multidisciplinary research institutes in subjects as varied as biohealth innovation, sustainable earth and transnational crime.

“During his tenure, the sponsored awards for research, scholarship and creative work increased by nearly 80%,” stated the report in The George.

Wu was instrumental in shaping George Mason’s Access to Excellence initiative, which aims to support the educational pursuits of students from all backgrounds, because he’s a firm believer in diversity across academia.

“Cultivating and nurturing all dimensions of diversity is more important now than ever before,” he wrote last November in his blog on the George Mason website.

“Severe political and societal polarization has affected humanity across the globe, which is stressing the fabric of our society and eroding the foundation of our democracy,” wrote Wu. “… This has devastating consequences as exposure to people, religions, cultures and ideas different than our own stimulates learning and shapes our capacity to empathize.”

Sociologist Examines Gendered Racism from the Perspective of Attorneys