How Dr. Hasan Jeffries is Rethinking the Way We Teach Black History

As a teenager in 1980s Brooklyn, Dr. Hasan Jeffries tried piecing together two different stories: the history he was learning in school and the events he was witnessing on the train to and from school. But they didn’t fit.

Originally on a path toward science, Jeffries partook in a summer research program at Columbia University following his junior year at a science-centric high school. But as he worked inside the lab, the world outside the lab’s window overlooking Harlem kept grabbing his attention. One question was nagging at him: How can a historical lens explain the African American experience today? 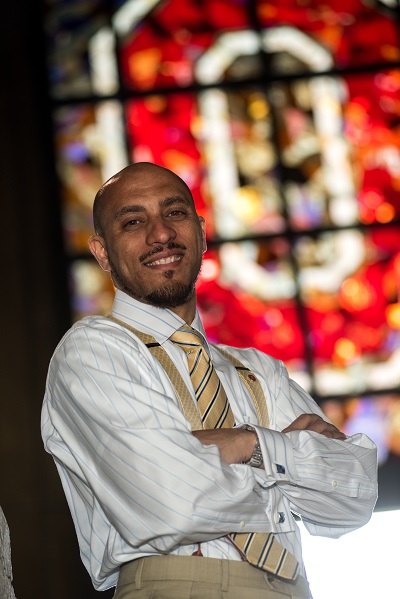 Eventually, during a banquet at the end of the summer research program, each student stood and shared what they had learned. “It got to me and I was like, ‘I learned that this is not what I want to do’ — and that was the end of the science experiment,” says Jeffries with a laugh.

From then on out, it was, as they say, history. Jeffries left New York for Georgia to attend Morehouse College, an historically Black all-men’s college in Atlanta.

“Being in a space that is all Black in the late 80s, early 90s, it was refreshing,” says Jeffries. “What we were studying and learning at Morehouse was a complete change. Suddenly, not only do you see yourself in the curriculum, but there is an analysis of society that was missing before. … Suddenly all of it begins to take crystal form.”

Currently, he says most of his students, both Black and White, enter college with a limited and problematic understanding of American history, one that he describes as the following:

“Black people are just missing; they aren’t there,” says Jeffries. “And then when we are there, it’s just a brief mentioning of ‘there was slavery which was really bad, then there was a civil war, and then there was Martin Luther King and that was it.’”

He said this hollow narrative not only steals the humanity of African Americans, as it depicts them as passive victims of American violence, but it makes them look partly complicit “as if they don’t want to be free.”

Instead, Jeffries lectures on how historical fact tells the opposite narrative, how Black history in America is “the persistence of resistance.”

“From slavery to the present, there was never a time when Black people are not mobilizing and organizing for change,” says Jeffries. “It’s important for people to recognize and realize that and to connect to the humanity of Black people. … That would go a long way toward appreciating the Black experience in a way that honors the desires and sacrifices that Black people have made to survive and thrive despite [racism and systematic oppression].”

In collaboration with the Southern Poverty Law Center’s Teaching Tolerance project, Jeffries helped write a 2018 report titled, “Teaching Hard History,” which offers free resources and guides on how to teach American slavery in classrooms for teachers who, he says, are “on the front lines.” As part of the project, Jeffries also hosts his own podcast under the same name.

“He’s a terrific scholar, but he’s also become a real public face for our department and our university on issues on civil rights,” says Dr. David Steigerwald, a U.S. history professor at The Ohio State University. “We’re really proud of the work he does, especially in, what the university calls, public face and engagement. He’s kind of a star with his work.”

Steigerwald also sang praises toward Jeffries’ first book Bloody Lowndes: Civil Rights and Black Power in Alabama’s Black Belt, which focuses on African Americans in rural Alabama who, along with student activists, formed an all-Black independent political party in 1966. Steigerwald says he returns to the book at least once a year and frequently puts it on his recommendation list for students.

Hasan Jeffries is the brother of U.S. Rep. Hakeem Jeffries (D-NY) and thus is not the only “Jeffries” in the public eye. However, though they do discuss current events in the Democratic caucus, Hasan says they remain, well, brothers, and thus, mostly talk about topics typical among siblings, namely football. Nonetheless, Hasan admires his brother’s role in politics.

“He has a good sense of the historical past and what it means to be a congressman in this particular moment in time,” says Jeffries.

After all, Jeffries says the historical past is crucial to understanding the present moment. Regarding the current political climate, for instance, he emphasized two crucial lessons from history, the first being that today’s rise in racial tensions isn’t an aberration, but part of a larger pattern.

“We can see it is part of a pattern in American political discourse that, when you have this perception of people of color gaining some kind of advantage, like with Barack Obama, they [the public] respond to that,” says Jeffries. “We see it in reconstruction and in the Civil Rights Movement.”

In addition, he added that the racist rhetoric employed by President Donald J. Trump and the far-right is evidence that another hard reality remains true in American politics.

But that’s not to say Jeffries is hopeless for the future. He likes to call what he teaches “useful” history, because at the end of the day, he wants his students to not only understand the present moment, but to change the moment for better.

“There’s a difference between useful and useless history and I try to focus on that useful history and share it with students so they can make sense of the world around them,” says Jeffries. “And hopefully they will take that into their respective fields of human endeavor and make a difference.”