Johnson was one of the “computers” who solved equations by hand during NASA’s early years and those of its precursor organization, the National Advisory Committee for Aeronautics. She calculated rocket trajectories and earth orbits for NASA’s early space missions. 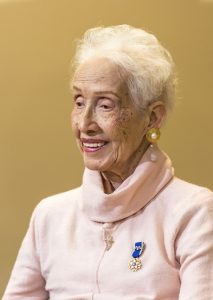 Johnson was portrayed in the 2016 film “Hidden Figures,” which told the story of pioneering Black female aerospace workers. She and other Black women initially worked in a racially segregated computing unit in Hampton, Virginia that wasn’t officially dissolved until NACA became NASA in 1958.

Johnson “was an American hero and her pioneering legacy will never be forgotten,” said NASA administrator Jim Bridenstine on Twitter. In 2015, President Barack Obama awarded Johnson — then 97 — the Presidential Medal of Freedom, the nation’s highest civilian honor.