Shikera Chamndany, a Black alumna in biomedical engineering at UC Irvine, went to campus to collect her transcripts on Feb. 20. She ended up spending the night in Orange County Women’s Jail.

That day, UC Irvine students held a protest in solidarity with graduate student strikers at UC Santa Cruz, fighting for a cost-of-living adjustment to their wages, which meant there was more security on campus than usual. Chamndany was unaffiliated with the protest, but according to a Facebook post by campus police, “forcibly entered” Aldrich Hall – a building on lockdown because of the student rally – and was arrested for “assaulting a police officer.” Campus police reportedly tackled and handcuffed Chamndany and took her to jail, where she stayed until her release the next morning. 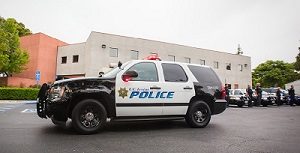 Minority students have been demanding a response.

The day after the incident, a petition – put out by the Black Student Union and United Students Against Sweatshops – called on the university to fire Trish Harding, the officer who arrested Chamndany, and ideally remove police from campus entirely. It also asked UC Irvine to provide free mental health services for Chamndany with a Black therapist for as long as she needs and to offer financial support toward her legal fees, student loans and graduate education – plus the campus parking fees she accrued while she was in jail.

“The university claims to be a ‘safe’ place, a place for all students to excel academically,” the petition reads. “But instead, the university engages in a range of practices and policies which reaffirm the message that we, Black people, are undeserving of safety and are dispensable.”

It ended with a request to UC Irvine chancellor Dr. Howard Gillman to respond to student demands by March 4. Over the course of a week, it collected over 1,500 signatures.

On Wednesday, Dr. Douglas M. Haynes, vice provost for academic equity, diversity and inclusion, addressed the incident in a letter to the UC Irvine Faculty Association, assuring them that the university shares “concern for those involved in the situation.”

“Our leadership is working closely with all parties to reach a mutually acceptable solution,” Haynes wrote. “Please be assured that we take this matter very seriously. Through its Office of Inclusive Excellence, UCI consistently demonstrates its commitment to a richly diverse and welcoming environment. The safety of our students, faculty, staff and alumni will always be our priority.”

His statement came in response to a letter from the UC Irvine Faculty Association to the chancellor, expressing professors’ worries about what happened. It called Chamndany’s arrest “violent and disturbing” and asked for a “thorough investigation” of campus police’s claims. It also advised the university to replace its Public Safety Advisory Committee with an independent oversight committee to scrutinize police procedures on campus in general.

“Were her arrest and detention racist or meant to intimidate and harass students, as the BSU (Black Student Union) has suggested?” the letter reads. “This uncertainty is itself unacceptable.”

Dr. Eyal Amiran, a film and media professor on the faculty association’s executive board, said the incident brings up “questions of the disparate use of power in relation to communities of color or disadvantaged students in minority groups on campus.”

He’s not “prejudging what happened,” he said, but he wants to see racial bias taken into account in a clear, transparent way by a committee strong enough to get the university to listen.

By and large, Amiran finds that the university offers opportunities for community input, like town halls, but they rarely yield real policy change, which can be “discouraging.”

But he appreciates Haynes’ response, he said, and he’ll be “watching closely” for “concrete action to follow” from the university.

More broadly, Amiran is also concerned about how campus police interact with protests. It’s not the first time the university reacted to student unrest in a “heavy-handed and inappropriate way,” which points to other structural problems, he added.

Because of the ongoing investigation, Liz Griffins, chief of the UC Irvine police department, declined to comment on the incident, but she wrote in an email to Diverse: “We are working closely with campus counsel, administration and leadership here on campus to do what is best for our community and those involved.”

Last week, several UC Irvine students spending a semester in Washington D.C. protested the chancellor when he spoke at the #SpeechMatters Conference, hosted by the University of California National Center for Free Speech and Civic Engagement. One of their goals was to call attention to the Black Student Union’s petition.

“We don’t want anything to do with the cops,” said fifth-year senior Fatima Bravo. “We want them off our campuses.”

At the #SpeechMatters Conference conference last week, Ace Anaya, a fourth-year student, held a sign, which in bold, colorful letters urged the chancellor to sign the Black Student Union’s petition.

“[Shikera] was traumatized for a night …” Anaya said, addressing Gillman during a panel Q&A session. “An apology isn’t enough. We need action.”