Less than two years since its inception, Calbright College is facing a state audit as people wonder where the money has gone.

Calbright, an online public college described as an alternative to traditional community colleges, promised to teach people more quickly and less expensively. On its website, it notes, “Calbright College was established with equity and accessibility in its roots.”

Former California Governor Jerry Brown championed the creation of Calbright, which has the mission of serving people who cannot readily access one of the state’s 115 existing community colleges. The cost to taxpayers — $100 million for development and $20 million per year for operating costs — was approved in 2018, Brown’s last budget cycle in office.

The college’s pilot programs began in October 2019, but already Calbright has had a shake-up in leadership with inaugural president and CEO Heather Hiles resigning in January. Ajita Talwalker Menon, who previously served under President Barack Obama as Special Assistant to the President for Higher Education Policy at the White House Domestic Policy Council, is presently the interim president and CEO. She was hired on Feb. 27. The board of trustees is conducting a search for a new president/CEO.

Last week, the Joint Committee on Legislative Audit voted unanimously to audit Calbright College. Assembly woman Sharon Quirk-Silva, D-Fullerton, was one of the lawmakers calling for the audit. 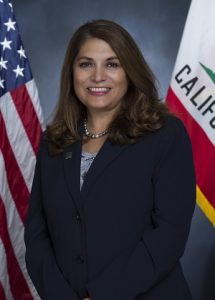 “When Brown proposed Calbright I had initial concerns,” said Quirk-Silva, who was a teacher in the Fullerton School District for 30 years and was first elected to the California State Assembly in 2012. “I knew we had a fairly robust online program within each community college. Not only that, but if there were courses that were not being offered online for students at one college, they could take them at another college because we had voted on that.”

Quirk-Silva said she tried to be optimistic as the legislation was passed and signed into law and the allocation of funds was made. She met Calbright administrators who assured her there would be robust programming. Hearing that Hiles had resigned was a red flag. Then, hearing enrollment numbers was another red flag.

Quirk-Silva said she understands a driver behind the creation of Calbright was a period of time where students at some of California’s community colleges couldn’t get the classes they wanted. The idea of hundreds of students being able to access an online course and meeting needs that a brick and mortar school could not was exciting. She also referred to career advancement possibilities for union members of the Service Employees International Union (SEIU).

“But then, [Calbright] just kind of dropped out of sight for well over a year,” said Quirk-Silva. “We didn’t hear anything and we actually had to ask about, ‘How is that program going?’”

Quirk-Silva said the idea of Calbright filling a gap, both in terms of reaching people and in terms of offering unique coursework, was appealing, but thus far it hasn’t materialized. That is one of the reasons behind the audit. “I don’t think we can afford the ongoing investment when we see too many red flags. Also, there is a vast amount of coursework that working adults can get from their local community college,” she said.

“Speaking for the organization, we welcome any oversight from the legislature and we welcome the opportunity to show what we’ve accomplished so far, what our plans for the future are and welcome any comments or direction that would help us improve our methods so we can better carry out the legislature’s mission,” said Taylor Huckaby, director of communications for Calbright College.

Huckaby said the legislature and the taxpayers of California are the college’s investors. The audit is an opportunity to show the progress to date and explain the timeline on which Calbright is working.

“We’re five months into operations in a research and development phase, so we hope to show what we’ve learned from what we’re calling our beta cohort because we are a statewide community college that is charged with serving learners and students all around the state,” he said. “There’s a lot of groundwork and foundational work that has to be done so that we can launch in a way that doesn’t set us off on the wrong foot.”

Huckaby said Calbright’s mission is to look at labor market needs and in-demand jobs and then create custom online curriculum that ladders into on-the-job training opportunities. It will be no-term and competency-based. He said this is not being done in the community college system at the scale that the legislature has asked of Calbright.

At present, there are 510 students participating in three program pathways: medical coding, information technology support and cybersecurity. Each pathway is divided into two courses. Those 510 students are working self-paced through their curriculum.

Huckaby said $19 million has been spent so far. Three faculty members have been hired as program directors/deans for these first three programs in the beta cohort. Administrative headquarters is in Oakland and there are satellite offices in Sacramento and Los Angeles. There are 42 in full-time staff.

“It has taken us longer to hire other faculty positions,” said Huckaby. “Previous leadership did not work with our state academic senate to the level that … they should have with faculty hiring. That’s a course correction we’re making with direction from our board of trustees. Currently, we have contracted faculty members that are on staff that come from the community college system.”

There are four faculty members in the IT program, two in the medical coding program and two in the cybersecurity program. Huckaby named several people and described them as present or past tenured faculty at other institutions. Review of their profiles show none have doctorates and only one definitely achieved tenure. That person described herself on LinkedIn as a faculty consultant to Calbright.

By 2026, Calbright would like to be serving 22,000 students and there is a roadmap to achieve that. Huckaby acknowledged that the college is in a transition phase given the change in leadership and search for a new president. Calbright is beginning its accreditation process and will be applying to the Distance Education Accreditation Commission this coming October.

Quirk-Silva said an audit will reveal how much money has been used and how it was allocated. She’s anticipating a report on Calbright in April and after reviewing that legislators will decide how and when to proceed with the audit.

“Asking for an audit sheds some light onto this,” said Quirk-Silva. “There are some real questions that need to be answered. The main question is, ‘Should this continue if it looks like it’s not serving the purpose that was intended?’”