Considered one of the world’s leading authorities on the subject of African American art, Driskell grew up in North Carolina and went to college at Howard University, said ARTnews. He also studied for a summer at the Skowhegan School of Painting & Sculpture in Maine. He received his Master’s degree from Catholic University, reported Press Herald. 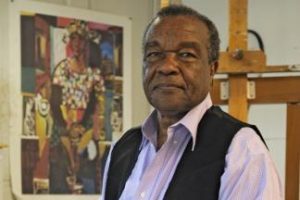 One of his most notable shows was “Two Centuries of Black American Art: 1750–1955,” which premiered in 1976 and is now considered one of the most important surveys of African American art, writes ARTnews.

“I was looking for a body of work which showed first of all that Blacks had been stable participants in American visual culture for more than 200 years; and by stable participants I simply mean that in many cases they had been the backbone,” he told The New York Times when discussing the show.

His most famous artwork “Behold Thy Son,” is currently held in the collection of the National Museum of African American History and Culture in Washington, D.C.

In 2001, the University of Maryland established the David C. Driskell Center to honor Driskell “by preserving and celebrating the rich heritage of African American visual art and culture.”

“During these challenging times, it is difficult to mourn one individual, but we at the David C. Driskell are here to honor his legacy and continue his work of supporting and promoting African American artists,” states the center’s website. “Once appropriate, we will ensure that our community has the chance to mourn and celebrate the life of a man who meant so much to so many of us. We will continue to update our community as his family releases more information to us.”