Earl G. Graves Sr. — arguably one of the nation’s most successful Black entrepreneurs — died on April 6., after a long battle with Alzheimer’s. He was 85.

In 1970, Graves founded Black Enterprise magazine, the first major publication to report on African American businesses, drawing a loyal readership in the millions. Later, the pioneering businessman expanded his enterprise into a multimedia company that included nationally syndicated television shows.

“Earl Graves was a true trailblazer for Black entrepreneurs and community empowerment,” said the Rev. Al Sharpton, the noted civil rights leader. “He made a real, measurable difference.” 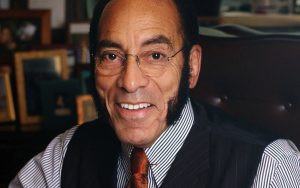 Born in Brooklyn, Graves earned his bachelor’s degree in economics from Morgan State University in 1958 and pledged Omega Psi Phi. It was during his years at the historically Black university that Graves developed and honed his entrepreneurial skills and began mowing lawns up and down Hillen Road on the west side of Baltimore.

“When people ask me about the most important influences in my life, I start by mentioning Morgan State University,” Graves once said.

Wilson first met the businessman shortly after he arrived on campus in 2010 to begin his tenure as president. Graves called to offer his congratulations and to request a meeting.

“He came to Morgan and had a conversation with me, and it was a very, very good conversation,” Wilson recalled, adding that Graves wrote a personal check in the amount of $10,000 shortly thereafter and remained an ardent supporter and friend across the years.

Wilson said that Graves “loved himself some Morgan State,” adding that his wardrobe often included the school’s signature blue and orange colors.

“Earl Graves was an original,” said Wilson. “He was one of the most successful entrepreneurs in American history and he paved the way for so many others and I think the entire nation owes him a special honor and a special day of recognition because of how he embraced innovation and entrepreneurship and created avenues for many successful African American entrepreneurs.”