Kevin Hollins, a catering driver, worked on Howard University’s campus for eight years before mid-March, when he and other subcontracted food service workers were temporarily laid off as the coronavirus shut down campus facilities. Now he’s filing for unemployment to help support his two teenage sons and nine-month-old daughter.

He described his financial situation as “very stressful.”

“It kind of messed up my savings,” he said. “The money that I did save, I’m dipping into that already, not knowing when we’ll go back to work.” 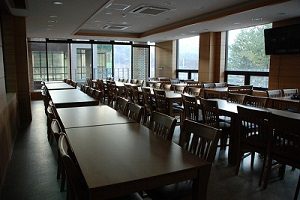 Technically, Howard University wasn’t Hollins’ employer. It’s Sodexo, a food services and facilities management company hired by the university. But Hollins feels like a part of the campus community, he said, comparing it to “family.”

Hollins is one of more than 400 subcontracted food service workers laid off from Washington D.C. universities, who are calling on their universities to ensure they receive pay and health benefits through the end of the semester. Their union, UNITE HERE, is asking Howard University, Catholic University, Gallaudet University and Trinity Washington University to pay their companies’ contracts in full so contractors can more easily provide wages for workers and maintain their health benefits during the pandemic, which is the union’s main focus.

For now, the union is taking care of workers’ health benefits. But if it continues, the health fund reserve will fall below 50% by June, which isn’t sustainable, said Damiana Dendy, a research analyst with UNITE HERE.

Through an email campaign, the union has been petitioning these universities to come to an agreement with companies, but as of this week, 113 emails to Howard University, 50 to Catholic University and 11 to Gallaudet University went without response, Dendy said.

“Our reserve fund is going to run out of money so we can’t just keep this up forever,” she said. “We really do need these companies and universities to step up and ensure that folks can at least be covered with their healthcare benefits.”

With subcontracted workers on university campuses, there’s a question of who’s responsible for making sure they receive their benefits and pay, especially as colleges strain under the financial burden of the coronavirus. Universities involved maintain that it’s on contractors to care for their employees and negotiate with the union, even if those employees worked on campuses.

Howard University, for example, expressed empathy for the workers in a statement to Diverse.

“We regret the impact this crisis continues to have on everyone and continue to work with vendors to take all the necessary steps to ensure the health and safety of students, faculty and staff,” the statement read. “Our vendors are important partners to maximize our capacity to protect our campus community and we will work together to manage the evolving situation.”

Gallaudet University similarly expressed concern for subcontracted workers but said the university couldn’t comment on the employees of its contractors.

“We value our employees and understand how important it is during these uncertain times to do what we can to provide a measure of stability to our employees by providing them with access to health care and other benefits,” the university told Diverse in a statement. “We expect our contractors to share the same principles in how they treat their own employees.”

Given the lack of work on campus, “it was unfortunately necessary to temporarily layoff a portion of the workforce but we are anxiously looking forward to a time when we can resume full operations,” wrote Maureen Metz, Metz Culinary Management executive vice president, in an email.

UNITE HERE usually petitions companies themselves, not universities. But in these dire circumstances, Dendy doesn’t buy that schools have no responsibility to their subcontracted workers.

Dendy acknowledged that the universities that have yet to make these agreements are more strapped for resources. But these contracts were already in university budgets, she said – plus, universities are set to receive funds from the CARES Act, the federal stimulus bill passed by Congress in March.

“Where is that money going to go?” she said. “Is it not going to the food service workers that work on their campuses every single day of the year? Are they just going to leave these folks out in the cold?”

She argued that it would be consistent with the overarching mission of these universities to play an active role in making sure these workers get their health benefits. Schools like Howard University and Gallaudet University were “founded on the values of providing for underserved communities,” Dendy said. It’d be “ironic” if they “left folks out in a crisis to fend for themselves.”

Meanwhile, Hollins is at home with his kids as employees across the country shelter in place. He cleans, cooks, checks homework and then the cycle repeats, like a “loop,” he said. But in between household chores, he and his coworkers talk about “making sure we’re not left behind.” He’s hopeful Howard students will help petition the university, and the school will agree to the union’s demands.

“When it snows, someone has to be there to feed the students,” he said. “We’re the ones who have to be there in the snow, when it’s inclement weather… It’s like one big family. Family is supposed to take each other. So, Howard has some responsibility to take care of us also.”