McDaniels began his athletic and academic career at Oregon State University where he earned accolades playing as a defensive lineman, said a statement on Emory’s website. 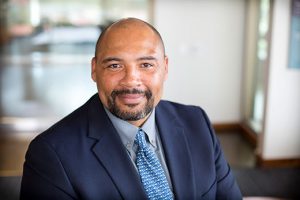 After Oregon State, McDaniels played for two years with the Birmingham Fire in the World League of American Football. After that, he joined the NFL’s Kansas City Chiefs, where he played from 1993-98, then played with the Atlanta Falcons for two years before retiring.

After his NFL career, McDaniels earned master’s and Ph.D. degrees in American Studies from Emory’s Institute of Liberal Arts. He then joined the University of Missouri-Kansas City as an assistant professor in history. He joined the Emory faculty in 2012.

“The depth of our sorrow and grief at Pellom’s passing is matched only by our boundless appreciation and admiration for the tremendous gifts and contributions Pellom brought to his life’s work to elevate and celebrate African American history,” said Rose Library director Jennifer Gunter King.

During his lifetime, McDaniels also authored several books, including Porter, Steward, Citizen: An African American’s Memoir of World War I (2017) and The Prince of Jockeys: The Life of Isaac Burns Murphy (2013).

McDaniels is survived by his wife and two children.