Donald Kennedy, a neurobiologist who became the eighth president of Stanford in 1980, died Tuesday of COVID-19, said the university. He was 88. 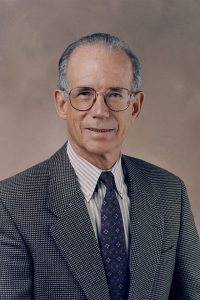 Kennedy was president of Stanford for 12 years, during which time he oversaw its transformation into one of the nation’s top research universities, the institution said. From 2000 to 2008, he was editor-in-chief of Science, the weekly journal of the American Association for the Advancement of Science.  Before that, he was commissioner of the U.S. Food and Drug Administration, from 1977 to 1979, under President Jimmy Carter.

“As we mourn the loss of Don Kennedy, we also salute his enormous contributions to Stanford and to our country,” said Stanford President Marc Tessier-Lavigne. “As a biologist, as a national voice for science, as a vigorous leader of Stanford University and as an engaging teacher beloved by so many students, Don brought to his endeavors an enduring commitment to academic excellence, a deep wellspring of warmth and good humor and a vision for the possibilities always ahead of Stanford.”