Online drag shows, miniature floats made out of shoeboxes, virtual panel discussions and dance parties – these are just a few of the ways LGBTQ students and alumni are marking Pride month. Even with parades shut down and campuses closed due to the COVID-19 pandemic, college communities are gathering online to celebrate.

At the University of Texas at Dallas, the Galerstein Gender Center has planned a month jam-packed with events, including LGBTQ-themed Netflix watch parties every Wednesday, “Rainbow Story Time” on Fridays, an online happy hour for queer faculty and staff and more. 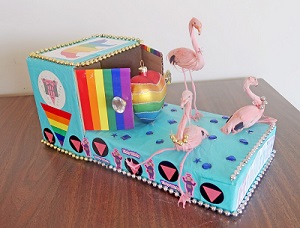 At Texas A&M University, its alumni organization, the Aggie Pride LGBTQ+ Network, is throwing a virtual Pride party on June 26, complete with a DJ and drag performers, all of whom are former students. One performer, who goes by “Paris Amour,” won the university’s drag competition, Draggieland, last year. Students and alumni are encouraged to wear their favorite Pride-themed attire.

The group is also hosting a series of five panel discussions in June called “Life After Aggieland.” Each panel is co-hosted with a different student group, with sessions ranging from how to network post-graduation, to the gender spectrum, to what it means to be a good ally.

This time is “extra stressful, extra hard,” said Brad Dressler, president of the board of directors for the Aggie Pride LGBTQ+ Network. “We want to make sure there’s a connection … [that people] realize there’s a whole community out here that are here to love and support you and celebrate who you are and also provide help and resources. But also just have a little bit of fun too.”

In addition to the party, Texas A&M’s LGBTQ+ Pride Center has planned a slew of events called Pride Live, including a panel discussion with Alok Vaid-Menon, author of Beyond the Gender Binary; trivia; readings of LGBTQ-affirming children’s stories on Instagram live; and a panel on sexual assault and domestic abuse in the LGBTQ community, especially during COVID-19.

Heather Wheeler, the center’s director of gender and sexual diversity, pointed out that LGBTQ students might be returning to hostile home environments. They may be cut off from their social circles and mental health and medical providers on campus, which can be a particular struggle for students taking hormones or preparing for transition, she said. With virtual events, the center has a “really unique opportunity” to offer support, not only to Texas A&M students but to whoever shows up. 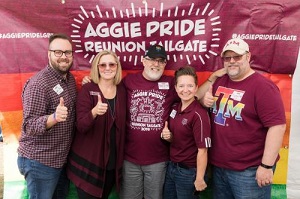 “We would love as many people as possible to join these events,” she said, and she hopes to publicize other universities’ Pride programs to her students, as well.

“There are a lot of people who are going to be coming here – either physically or online – in the fall, and they need to know there is an active community here for them, that there is support,” they said. “Going to college is scary enough, but when you’re queer or from small [town] Texas or from some of these smaller areas, [college] may be your opportunity to come out … It’s about that representation and visibility.”

Though parades – some of the most visible Pride events – are canceled, the Lambda LGBTQ Alumni Association of the University of California at Los Angeles (UCLA)  is hosting a virtual parade on Facebook Live in July. The parade will feature short virtual musical performances. In addition, students, alumni and anyone who wants to participate are encouraged to make their own miniature floats out of at-home materials.

One participant made a float out of an upside-down lasagna pan covered with decorations and stickers.

It’s “a creative expression of Pride they can share with the world,” said Steven Llanusa, the parade’s coordinator and the group’s student support committee chair. 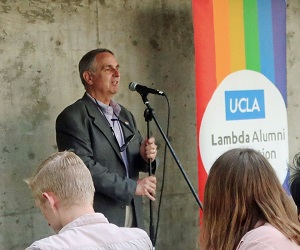 Mini floats can honor grand marshals – celebrities, historical figures or even fictional characters portrayed by dolls in toy cars – and participants can also share “grad marshals,” a float or figurine dedicated to a UCLA graduate.

Janet Napolitano, president of the University of California (UC) system, will be celebrated as the “honored marshal” of the parade “for her long commitment to the LGBTQ community,” said Llanusa. He pointed out that under her leadership five years ago, applicants to UC schools were able to self-identify as LGBTQ and become eligible for scholarships dedicated to the queer community.

For him, it’s particularly important to celebrate Pride month during a time of crisis.

“I’m old enough to have lived through the AIDS crisis and know how devastating loss of community can be when members are passing away or shunned by their families,” Llanusa said. “And this is another plague that we’re going through right now, so to band together and support each other is just as important now as it was in the ’80s.”

The theme of UCLA’s parade is “We’re In This and Out Together.”

“I hope [participants] realize that community is more than physical presence,” he said. “We are a community that supports each other in ways that aren’t always tangible or visible … So many of us LGBTQ people grew up feeling like we were alone, even when we weren’t. This will help us realize we aren’t alone regardless.”