For four generations, Dr. Shuly Rubin Schwartz’s family has studied at the Jewish Theological Seminary (JTS), one of the foremost institutions in Jewish higher education as well as the academic heart of the Conservative Judaism movement. Her grandfather went to the school’s teachers’ institute and her parents graduated from the seminary, as did Schwartz and her son. 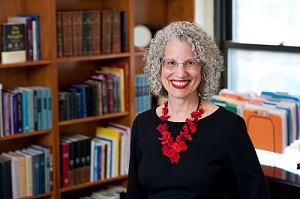 “It’s very, very exciting to take on this new role and have the opportunity to shape an institution that I love,” she said. She praised – and plans to sharpen – the school’s “serious, critical, intellectual engagement with Jewish text and our history” and its “vibrant religious community where … everyone in the community cares about the Jewish future.”

Previously its first woman provost, Schwartz has spent almost her entire academic career at the seminary. For 25 years, she served as the dean of List College, the school’s undergraduate dual-degree program with Barnard College and Columbia University. Plus, Schwartz spent the last ten years as dean of the Gershon Kekst Graduate School, where she spearheaded a master’s program in Jewish ethics, a new certificate in ethics and social justice and a joint Jewish ethics master’s program with Columbia University’s school of public health. While in those positions, she served as a professor of American Jewish history.

Schwartz also earned her own master’s degree and doctorate at the seminary, making her time there about 30 years in total.

“Dr. Schwartz has played a major role in creating the special academic community that is JTS,” Alan Levine, chair of the seminary’s board of trustees, said in a statement. “And we are confident that her vision and unique skills will ensure JTS’s continued stature as a leading academic institution of the American Jewish world.”

As a scholar of American Jewish life and gender, the significance of her new position isn’t lost on Schwartz.

“I know very well the symbolic importance of being the first woman in this role, and that is really exciting and a real privilege for me,” she said. “At the same time, I believe I’m chosen because I’m the most qualified person for the job.”

In a statement, the current chancellor, Dr. Arnold Eisen, said she brings to the position both a “historian’s keen awareness of the central role that JTS has played for over a century” in Conservative Judaism and Jewish thought and a “fierce determination” to meet the school’s challenges “with confidence and courage.”

Schwartz is taking the helm at a complicated time for both higher education and religious institutions, with many struggling to decide when to open their doors as the COVID-19 pandemic continues.

As provost, Schwartz was a part of the process of pivoting online this past spring, so she’s already had a “close up view” of the questions surrounding the pandemic and possible solutions, she said. As public health recommendations continue to shift, she hopes the school’s newly built campus will be able to re-open, at least in some capacity, with summer training for faculty in triage education, teaching both live and online.

Despite the challenges, Schwartz has also been inspired by the “hunger” she’s seen for the seminary’s online offerings. When she gave a virtual lecture, 700 people joined from the seminary and beyond. During the spring semester, the seminary also held virtual teach-ins and celebrations for Jewish holidays and regular online prayer services, in lieu of a ‘minyan,’ the traditional gathering of at least 10 people usually required for Jewish communal prayer.

These innovations energize her, not just as a higher education leader but as an academic who studies American Judaism.

“I’ve been really moved in the past few months to see the tremendous explosion of experimentation,” she said. “So much of Judaism involves community. Whether we’re connecting on Zoom or however we’re doing this, I’d say each stream of Judaism is figuring out and experimenting with new ways to engage, to forge community, to care for one another … It’s inspiring to me as a Jew and it’s thrilling to me as a historian. I feel like we are living in such an exciting age in Jewish life.”

Though she’s taking leadership in somewhat unprecedented times, true to her research focus, Schwartz finds motivation for the work ahead from the past.

As she prepares to step into her new role, she’s been thinking about Henrietta Szold, the first female student at JTS in the early 1900s and the founder of Hadassah, a Zionist Jewish women’s volunteer organization, “probably the most Jewishly educated woman of her times.”

“I take inspiration from those women who pioneered serious intellectual engagement, outstanding leadership …” she said. “I feel like I stand on the shoulders of all of those leaders, not only the ones who now can have public roles of being in charge but even those who were not so visible … behind the scenes yet so essential.”

Swastikas Painted on Wall Outside of Professor’s Office Triggers Investigation