The American Athletic Conference (AAC) will implement “strict” football game day guidelines for marching bands and spirit squads, according to a Memphis newspaper, The Commercial Appeal.

Though the AAC has not made an official announcement, an anonymous source “with knowledge of the situation” confirmed the restrictions on Wednesday. If true, the AAC would be the first Division I conference to 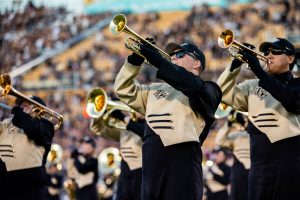 issue formal orders in an effort to combat the spread of COVID-19.

The restrictions reportedly apply only to members of each school’s marching band and spirit squad/cheerleaders. The order would ban travel to road games for any school’s band or spirit squad as well as on-field performances for the home team’s band.

While the home team’s band will be allowed in the stadium, the source says it will likely play with a reduced number of musicians who will be required to practice social distancing. In addition, the home team’s spirit squad will not be allowed on the field at the beginning of the season.  However, as the season progresses, such limitations may be re-evaluated.

Reimagining International Student Recruitment in the Age of COVID-19: Cross-Continent Collaboration and Partnership Agreements, and Innovative Delivery Models Have Never Been More Important