The University of Maryland Welcomes Its First African American President

Dr. Darryll J. Pines began his role as the University of Maryland’s 34th president on July 1. Previously the Nariman Farvardin Professor of Engineering and the dean of the A. James Clark School of Engineering, he’s the university’s first African American president. 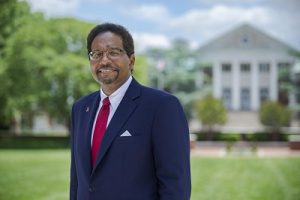 He began his role by announcing twelve new initiatives, including increasing the university’s mental health staff; hiring a coordinator for immigrant and undocumented student life; naming new residence halls after figures who contributed to University of Maryland’s diversity; and establishing a taskforce on campus policing.

“Excellence and diversity, equity and inclusion for me are synonymous with greatness,” Pines said. “And that’s what I intend to do for this university.”

Diversity was also a top priority when he served as dean of engineering, he added. Under his leadership, the number of women and underrepresented minority faculty doubled.

He comes into his new position at a time of uncertainty, as the University of Maryland prepares for a phased reopening in the fall. The university plans to ask students to monitor their symptoms daily and will have protocols in place for quarantining in the dorms. Over summer, the school is also looking into its waste water system and the air flow in its buildings to monitor for pathogens.

“We’ve been working with the state of Maryland and the county and also following federal guidance to develop an approach that will make our campus safe and healthy for all of its citizens,” Pines said.