On Aug. 11, more than a half century ago, the nearly all-Black community of Watts in South Central Los Angeles was simmering in a California heatwave. But before the day was done, Watts exploded into violence and flames after an abusive White patrolman arrested a young Black man for driving drunk. The incident touched off the Watts Rebellion, one of the largest urban uprisings in the nation’s history.

Watts erupted in 1965. For years it had been a tinderbox for Black rage. Then, like now, widespread racial disparities, which ignited the uprising, were roiling America. Health disparities. Poverty. Police brutality. Crime. Poor housing. High unemployment and underemployment. Underfunded and racially segregated schools. 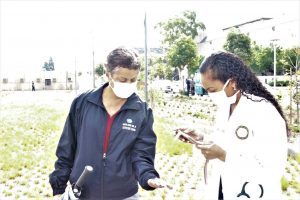 In the aftermath of the Watts Rebellion came the historically Black Charles R. Drew University of Medicine and Science (CDU), founded in 1966, in Los Angeles. Today, the institution named for the pioneering Black physician who developed blood banks is thriving. Located in the Watts-Willowbrook neighborhood of South Los Angeles, CDU is a healthcare bridge to a resource desert that some say is still in recovery decades after Watts erupted.

The million people, largely Black and Hispanic, who live in South Los Angeles have some of the worst health outcomes in Los Angeles County. That’s particularly troubling today as the burden of the coronavirus pandemic gets layered on top of those still smoldering embers, says Dr. Deborah Prothrow-Stith, dean and professor of medicine at CDU.

As she looks deeper, Prothrow-Stith suggests that scars left by the decades-old unrest are deeply linked to the racial and health disparities the pandemic has exposed in the most vulnerable populations served by CDU. Mounting reports, like a recent report from APM Research Lab, indicate that Black people, more than other racial and ethnic groups in the United States, continue to be the hardest hit, with higher rates of COVID-19 infections, deaths and hospitalizations.

COVID-19 testing in communities of color

Across Los Angeles County, in more affluent communities, COVID-19 testing centers were plentiful, she says. But none existed in the predominantly Black and Hispanic neighborhoods in South Los Angeles until CDU partnered with county officials to open a free testing center on its campus in early April. Testing was a part of CDU’s early and earnest response to COVID-19, points out Dr. Cynthia Davis, a public health professor at CDU and an expert on HIV testing and prevention.

In the early 1980s when the HIV virus emerged, little was known then about how it was transmitted. But what Davis and others at CDU observed and quickly responded to was the overlooked and outsized toll that the infection was having on people of color living in South Los Angeles. In 1984, before HIV/AIDS was declared an epidemic in the United States, the university got ahead of the curve, delivering prevention programs to those vulnerable groups. And, since 1991, they’ve operated an HIV mobile testing center.

Decades later, targeted outreach that can support COVID-19 testing, Davis says, is made easier with the mapping and tracking system the university uses to gather, manage and analyze emerging data on disease and health. By mid-June, “Over 27,000 people have been tested. That’s important,” says Prothrow-Stith of the university’s efforts to ensure that those most at risk of getting infected and dying of COVID-19 could be tested. At first, the number of people walking and driving up to the test site was low. That’s because many stayed away, doubtful that the test would really be free — or safe. And for some others, it was fear of the testing procedure or of being questioned and reported to immigration if they were undocumented, center organizers learned. 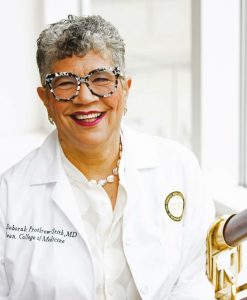 That’s when CDU focused on bridging the information gap and busting myths about COVID-19 and people of color. It was part of a broader campaign to remove systemic barriers that included messaging in Spanish and English and direct community outreach to people of color by healthcare providers who looked like them.

Prothrow-Stith says such efforts made the difference in increasing testing numbers and helping to slow new outbreaks. By mid-June, the CDU testing center was struggling to meet demand. In partnership with county officials, CDU researchers are collecting and analyzing demographic data, zip codes of where tests are performed, and COVID-19 fatality rates. Prothrow-Stith says a preliminary report on those findings was released in June.

One thing CDU knows for sure, she says, is, “with outreach and the support of community partners, Black and brown people and those in underresourced communities will come to be tested [for COVID-19].” And from her place on the front lines, trust in CDU has also been an advantage, said Dr. Sheila Young, who oversees the campus COVID-19 testing center.

In South Los Angeles, like elsewhere in California, some of the highest death rates from COVID-19 (by June 5) have been among African American residents, a grim, but anticipated finding, says Prothrow-Stith. But less expected are the “higher than expected positivity rates we are seeing in the Latinx community,” Prothrow-Stith told Diverse ahead of the report’s release. Latinos make up over half of the COVID-19 cases in California, where they are about 40% of the state’s population.

For Charles R. Drew medical students, like thousands of other physicians-in-training around the world, the era-defining COVID-19 pandemic may prove to be one of the most meaningful lessons of their emerging careers. Already, it’s expanded the curriculum and learning at CDU. There’s a new emphasis on the study of pandemics and the public health demands posed by a formidable contagion: training in contact tracing and the role of testing.

But for Prothrow-Stith, an internationally known public health expert, one of the most important lessons that she wants her future doctors and practitioners to learn has been taking place on the phone, not in the classroom. It’s about understanding the importance and intersection of things like race, access to healthy foods, wealth and zip code — what those in public health call the “social determinants of health.”

Serving as contact tracers, CDU medical residents and nurse practitioner students inform people that they tested positive for COVID-19. But beyond calling to discuss test results and the need to quarantine, students are listening to stories of personal struggles with unemployment, hunger, homelessness and the lack of healthcare — and they are responding, linking people to local social services, clinics and other resources.

“In the face of this pandemic,” says Prothrow-Stith, “these have been constants in the conversations that our residents are having.”

They also represent the kinds of health care alarms that have been sounding in underserved communities and communities of color, but are now more acute in the wake of COVID-19, Dr. James E.K. Hildreth, the president and CEO of Meharry Medical College in Nashville, Tenn., told the House Ways and Means Committee in May.

And best-suited to respond urgently and long after the pandemic, he said, are the nation’s four Black medical schools. Meharry as well as Howard University College of Medicine, Morehouse School of Medicine and Charles R. Drew University of Medicine and Science are “filled with professionals who are singularly armed to address our current healthcare crisis.”

Providing COVID-19 testing and outreach in communities hard-hit by the outbreak, says Prothrow-Stith, a former emergency room doctor, represents the university’s immediate response to that crisis — and Hildreth’s call to action. But CDU’s long-term plan, now underway, is to establish its first, independent, four-year medical school.

“We are underresourced in South LA when it comes to physicians and nurses, especially those who look like the people we’re serving,” Prothrow-Stith says. When the new medical school opens in 2023, CDU wants to include students from South Los Angeles in its first class of 60. Without a school of its own, CDU has partnered since 1981 with the University of California, Los Angeles (UCLA) to train its physicians. About 24 students a year graduated, earning a joint degree from CDU and UCLA. That program will continue to operate after the new CDU medical school opens.

To look forward to the new medical school also means to look back to August 1965.

“We [CDU] have a remarkable history that was born out of the Watts revolt,” says Prothrow-Stith. “It was at that intersection of health inequities and police brutality that sparked CDU. As we prepare for 2023, we are at another threshold moment.”

Panel Explores Accreditation and Role of HBCUs During COVID-19 Crisis

Disruption and Digital Generational Literacy: Are You Ready?