Black Lives Matter protests erupted across the United States this year, provoked by the killings of George Floyd, Breonna Taylor, Ahmaud Arbery, and many others that have not seen full justice. As Asian Americans, we need to assess how we’ve been silent or apathetic to Black issues. It’s time we speak up and do something for Black Lives Matter – because frankly, we haven’t done enough.

As a daughter of Vietnamese immigrants, I recognize that my parents’ sacrifices afforded me certain privileges that come with being born in the United States. A primary and salient one being education; a privilege given to me that wasn’t historically granted for Vietnamese women including both of my grandmothers. Growing up, my parents placed the most emphasis on education. I was expected to work hard, get good grades, and stay out of trouble, and these lessons inherently taught me to mind my own business.

As a recent master’s graduate, I realize that the professional characteristics, personal behaviors, and work ethic I developed over the course of my life are constantly rewarded and reinforced whenever it fits the dominant society’s expectations of the model minority — even though Asian Americans are not monolithic, I believe this is an experience that many of us can understand and relate to. 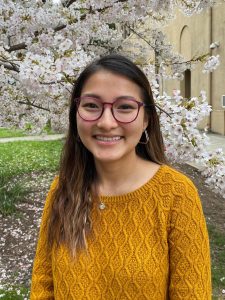 What is a model minority? First, it’s a myth. Second, this myth was racially constructed during the 1960s to pit non-White groups against each other, primarily against African Americans during the Civil Rights Movement. The model minority label serves to perpetuate White supremacy by vilifying communities of color, particularly Black communities, for speaking out against injustice and our own communities when we serve a threat to White privilege. Third, the idea of a model minority serves as a powerful rhetorical strategy that blames Blacks for not achieving the same level of “success” as Asian Americans when both groups experience racial discrimination. The myth tries to promote the idea that Asian Americans have been successful in America due to their strong family values and enough hard work, while completely ignoring the generational set back, trauma, and disparities that African Americans experience from two centuries of enslavement.

In response to this, Asian Americans need to shred the model minority myth because it has been weaponized and used as a tool to uphold White supremacy because of our proximity to Whiteness. If we are complicit or stay silent, we continue to make it harder for other marginalized groups to exist, survive, and thrive in America. As human rights activist Desmond Tutu said, “If you are neutral in situations of injustice, you have chosen the side of the oppressor.” As Asian Americans, we need to stand for Black Lives Matter and acknowledge the racism, colorism, and anti-Blackness that exists within our communities and that we may have internalized growing up.

I admitted earlier, as I was raised to obtain the characteristics of the “model minority,” I also received racist, anti-Black messages growing up. Sometimes it was subtle, like when I was told to cover up in the sun so that my skin wouldn’t get dark. Sometimes it’s questionable, like when I received grand praise for dating a White guy. And sometimes it’s blatant, like when I hear Asians say they don’t like Black people. I’m not the only Asian American with similar experiences, but it is time we denounce any anti-Black messages we get from our family, friends, and cultural communities.

When I moved away to attend college, I was introduced to new people, experiences, and ideas. Many of the beliefs I obtained from my upbringing were challenged; I had to admit to myself and others that I had implicit biases related to colorism, anti-Blackness, and the model minority. We all have implicit biases, but it’s important that we question how and why we have certain biases in order to recognize that we can and should unlearn them. Through education (a privilege I am extremely grateful for), I had the opportunity to shape my personal beliefs from readings and interactions with people from different backgrounds. I recognize that my upbringing and experiences in America are significantly different from my parents and grandparents who grew up in rural Vietnam. Yet, the educational and generational gap is not an excuse to maintain racist beliefs, appease dominant White culture, and stay silent to uphold our imaginary status as the model minority.

While it took time, compassion, and numerous difficult conversations for me to conceptualize, unpack, and unlearn how racism is deeply embedded in my upbringing and culture, I realized I’m at a place where I need to do more – and I’m asking other Asian Americans to do more with me.

For some, it’s taking the first step to acknowledge and accept that Black Lives Matter. For others, it’s protesting, making donations, and reading to educate ourselves. We should be having the difficult conversations with our families on why Black Lives Matter. Other times, it may be blatantly rejecting our model minority label such as being an active bystander and calling out the racial injustices that are present in our daily environments.

Regardless of what you do, it is crucial that you keep doing something. Our collective liberation and destinies are intrinsically interconnected with other communities of color; especially the Black community as history revealed that the Civil Rights Movement in the 1960s was a pivotal turning point in ending the race-based immigration quota system, which benefited numerous Asian immigrants. Our fight for equality and racial justice is a marathon – not a sprint – and requires a consistent commitment to being anti-racist or else we’ll continue to be used as pawns to systematically uphold White supremacy.

Speaking up can be uncomfortable for many Asian Americans as many of us may have been explicitly told to be quiet or to mind our own business earlier in life. Yet, if there’s ever a time for us to overcome our privileged fears, it is now. Recognize that our silence during racial injustices will be remembered and has an impact as Black lives continue to be disportionately lost in America. Speak up and take action. It’s time for generations of Asian Americans to show solidarity and make the message clear that Black Lives Matter, that all Black lives have always mattered.

Steffi Huynh is a John Smartt Summer Scholar at the Center for Minority Serving Institutions at Rutgers University.

A Primer on Asian Americans