Faculty at the University of Kentucky (UK)’s African American and Africana Studies program are requesting that the school change the name of downtown Lexington’s Rupp Arena, which is named after Adolph Frederick Rupp, an accomplished basketball coach who has “come to stand for racism and exclusion” and alienation of “Black students, fans, and attendees,” reports ESPN.

In his 42-year tenure, Rupp led the Kentucky team to four national championships, but his alleged use of derogatory language and racism toward Black players has tainted public perception of him. Now, with the arena undergoing a $275 million renovation, the faculty wrote in a letter to Dr. Eli Capilouto, UK’s president, on Thursday that it’s an opportune time “to change the name to a far more inclusive one, such as Wildcat Arena.”

According to the Washington Post, however, the arena is not owned by the school but, instead, by an arm of the local Lexington 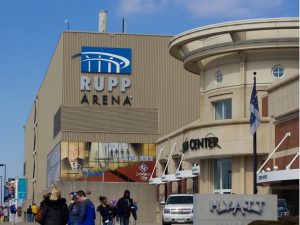 government. And in January, the arena’s naming rights were sold to Central Bank, a local community bank.

In addition to changing the arena’s name, faculty also asked that the school remove names of “enslavers, Confederate sympathizers, and other white supremacists” from other campus buildings; that all UK undergraduates be required to take a mandatory course on race and inequality; and that the school boost support for and representation of Black students and faculty on campus.

“We recognize that the University has already announced a set of steps to enhance diversity,” AAAS faculty wrote in the letter. “We propose another series of actions that focus on deeper, structural change. These actions will alter the institutional realities concerning racism on our campus and move us toward racial equity — not just diversity and inclusion — in our community. … These actions will demonstrate that Black lives truly do matter at the University of Kentucky.”

In response, the school released the following statement: “The faculty and students who have expressed these concerns are deeply valued members of our community. We thank them for their continued passion and commitment to advancing equity at UK. Senior officials have been meeting and corresponding with them to address their specific concerns, which speak forcefully to the systemic and institutional racism that we must thoughtfully and urgently address as a campus.”

70 Years of Integration, a Journey Still Unfolding at the University of Kentucky