In his second year as the University of Maryland’s head football coach, Michael Locksley is hoping to promote the hire of more minority football coaches through his newly-created nonprofit National Coalition of Minority Football Coaches, reports The Hill. 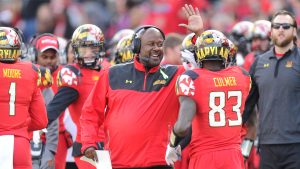 football, I thought to myself, ‘There’s something missing. I’m on the back nine of my career and the pathway to becoming a head coach is still as difficult as when I got into the business in 1992,’” Locksley told NFL.COM. “I wanted to create an organization that would be able to help prepare, promote and produce the next group of coaches coming up through the ranks at every level.”

Through his nonprofit, Locksley intends to identify, train and support coaches of color, ultimately creating a list of qualified candidates for potential NFL coaching positions.