Namandjé Bumpus was an undergraduate student when she delivered her first national conference lecture. In the audience were those she hoped someday to call her peers in science and research. When she concluded, hearty applause followed, but later came a moment of shock.

“After my talk, a very established, White senior faculty member came up to me and said it was good, but you sound like you’re from a slum.”

Although stunned, Bumpus recovered in time to politely retort: “It seems like you’re basically saying I’m Black.” With that, the faculty member turned and walked away.

Bumpus, then a young, aspiring scholar and future pharmacologist, did what she learned as a child — to give voice to injustice and not shrink. That encounter would be the first of many that Bumpus would recognize as overtly racist or subtle signs of disrespect. Over the years, says Bumpus, they have become common threads in the “millions of stories that she and most Black people in science can tell” — despite how far they climb. 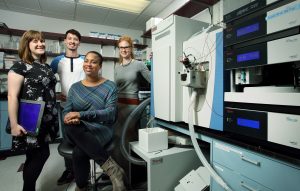 Undeterred, Bumpus, now 39, has blazed a career path that’s taken her to the top of her field. In May, Bumpus made history when she was named director of the nearly 130-year-old Department of Pharmacology and Molecular Sciences at the Johns Hopkins University School of Medicine. The appointment makes Bumpus the first African American woman to lead a department at the School of Medicine and the only African American woman currently chairing a pharmacology department at any medical school in the United States.

When Bumpus’ promotion was announced publicly on May 13, the COVID-19 pandemic had already shuttered the medical school and her lab. Still, calls and well wishes from some colleagues and even neighbors showered her on that day. But hate rained down, too, she said, in the form of “racist Tweets and emails” from those who balked at and questioned her appointment. For Bumpus, though, the moment was bittersweet for other reasons.

“It was hard to be as joyful as I should have been because of the emotion of everything that I saw happening in the world.” The shooting deaths of Ahmaud Arbery and Breonna Taylor were among them. Then, just days after her appointment, Bumpus says, came the killing of George Floyd and, on its heels, a national uprising. “I definitely felt a heaviness.” In those moments, Bumpus was reminded of another weight that she’s known.

She’s not alone. As the call for a racial reckoning rises, scientists like Bumpus decry not only police brutality but long-standing gender and racial bias within their fields and in the academy. An uptick in social media posts reflects that urgency. Some tagged #BlackInTheIvory or #BlackScienceMatters are among those shining a light on the experiences of Black faculty, researchers and students and the transformation they seek. June 10 was a flashpoint. Many scientists took part in a nationwide strike meant to shut down STEM industries in support of the Black Lives Matter movement.

She’s felt its sting and witnessed it too. Whether it’s someone who wrote the “n-word” across a card that announced a scientific award she received and left at her lab door, or when the competency and qualifications of African American candidates in universities are questioned in a way that isn’t done to non-African Americans.

Together or one by one, “those things don’t feel good,” Bumpus admits. But the tumult in the world outside and the one swirling in her world of science are colliding, just as Bumpus, the new department chair, plants her feet.

“I want to be a leader for everyone, but at the same time,” she says, “I recognize that I am experiencing something very unique. And there are other Black people in science who are also experiencing something that’s unique and specific to us.” Now, add to that these demands: “I’m trying to navigate taking care of myself and being a support, especially to the more junior students in science, and doing the day-to-day leadership things, too. It is a lot to hold at once.”

But at a time when the issue of anti-Blackness and the call for systemic change have managed to get the attention of some in the nation and the academy, Bumpus knows that the door is wide open for her to speak up and lead. It also comes with her new role.

“I’ve always been vocal, but I’m speaking up more and trying to be transparent with my colleagues about my experiences. For example, what it’s like being a Black person, not just at Hopkins but in the scientific community. What it’s like to go to a scientific conference and not see another Black person or another Black woman give a talk. My colleagues have also been asking me what they can be doing to advocate for change,” Bumpus explains.

“We need something different in the academy and for our students. We say that we want science to be accessible to everyone, but I think that we have to start showing that.”

Bumpus joined Johns Hopkins in 2010 as an assistant professor in the Division of Clinical Pharmacology. She became an associate professor in 2015, and, from 2015 to 2017, Bumpus served as the school’s first associate dean for institutional and student equity, a role that resonated for her.

“That was a graduate student mentoring job with a focus on diversity,” she says. “I wound up being a person that a lot of graduate students came to talk to. Luckily, the school gave me the opportunity to do it formally. I had that role for two years and met one-on-one with 450 graduate students from across the university to give them a safe space to talk about their lives and careers.”

Dr. Sherita Hill Golden, vice president and chief diversity officer at Johns Hopkins Medicine, worked with Bumpus to usher in opportunities like this for students of color. “In addition to her scientific and professional accomplishments, she has a tremendous record of mentoring both those who are underrepresented and those who are not…,” Golden said in a university interview.

Looking at the STEM pipeline, Bumpus emerged at the far end, but few are entering pharmacology who look like her. Black students, in 2017, received less than 5% of undergraduate degrees in pharmacology, and, for Black women, it was less than 1%, according to the National Center for Education Statistics. In that racial disparity, what concerns Bumpus is the potential sea of talent that too often is “very actively and early discouraged by teachers and professors from pursuing the profession or careers in STEM.” She could have been one of them.

“As early as kindergarten, I was told I couldn’t do [science],” recalls Bumpus who credits her parents — a professional boxer and an educator — for nurturing the early interest she had in chemistry since she was 8 years old.

Growing up in Massachusetts, Bumpus’ journey through the pipeline was propelled by a public science and technology high school. It’s where she decided to pursue a career in pharmacology.

“It sounded perfect,” she said then. “Your job is to work on drugs, discover drugs and make drugs better.”

She could easily have been derailed by White teachers who did not nurture her interest in science. But again, she says, “… because of my family, I didn’t feel deterred.” Bumpus, the first person in her family to graduate from college, earned a bachelor’s degree in biology from Occidental College in Los Angeles and a Ph.D. in pharmacology from the University of Michigan.

Today, at Johns Hopkins, Bumpus, an award-winning scientist, researches the genetic differences that influence how the body processes drugs used to treat HIV. This is work that she says aims to correct a longstanding limitation of scientific research. “Most studies are done on European-American males in their 20s. There are so many people missing in that picture.” Among them are African Americans who are disproportionately impacted by HIV. “Our work,” she says, “is finding that many African Americans may respond differently to certain drugs.”

In addition to her role as department director, Bumpus will hold the E.K. Marshall and Thomas H. Maren Professorship in Pharmacology.

Since Bumpus was a graduate student in his lab, she says one of her biggest professional cheerleaders and role models has been Dr. Paul F. Hollenberg, professor emeritus in the Department of Pharmacology at the University of Michigan Medical School.

“She was ready for this appointment [as department chair] and will not only do a good job,” says Hollenberg, who is White. “I know that Namandjé will continue to serve as a great role model for students and faculty.”

In May 2020, in a department of pharmacology and molecular sciences that was founded in 1893, Bumpus broke the color barrier. But at most schools, she points out, the same kind of change “is not on the radar” and has yet to come for other accomplished Black faculty and scientists.

“Although it was May 2020 when I was appointed, I still think Hopkins is leading on inclusion and making a concerted effort.” Looking forward, a hopeful Bumpus says, “I don’t think that I will be the ‘only’ for long.”