Franklin, who is currently a distinguished professor of social ethics at the Candler School of Theology at Emory University, is one of the nation’s most prominent theologians and recently published his latest book Moral Leadership: Integrity, Courage Imagination. He previously served as president of the Interdenominational Theological Center (ITC) in Atlanta.

In a recent interview with Diverse, Franklin said that his campaign is committed to keeping alive the legacy and work of Lewis. 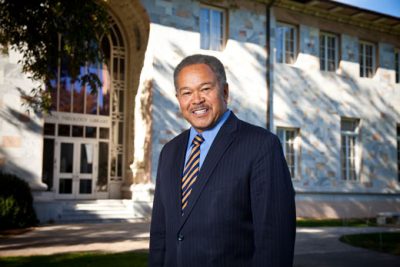 “These are the final days of Congressman John Lewis’ term and I think they should be properly honored and stewarded with care and respect,” said Franklin. “The 790,000 people in Georgia’s 5th congressional district right now have no vote and no voice while significant questions are being debated in Congress. And the kinds of issues that are emerging have social and ethical dimensions that John Lewis would have weighed in on with great passion. I know the Congress and I know the district so I could hit the ground running, albeit a brief term, but speak truth to power and try to heal some of the divide and polarization in the nation today.”

Franklin said that his experience in higher education—especially at the presidential level—has prepared him for public service and can “offer some insider perspective” on important debates about education, particularly in the age of COVID-19.

“I can help reality test some of these misperceptions, challenge them outright and be an educator on Capitol Hill helping to orient Congress,” about the challenges facing higher education, having worked at a historically Black college and a Research 1 institution, he said.

Franklin’s tenure at Morehouse—his alma mater—from 2007 to 2012, brought about enormous growth for the HBCU. He presided over the completion and opening of the $20 million Ray Charles Performing Arts Center and Music Academic Building.

Franklin said that he became close to Lewis in the 1980s and that the relationship between the two blossomed when he took the helm of ITC and later Morehouse. He said that he would often visit Lewis in his Capitol Hill office to engage in heady discussions about “how political life sometimes collide with the world of ethics and the moral life.”

Lewis, he said, would always center the conversation back to love, reconciliation and forgiveness.

With an eye to the election, Franklin said that he is concerned about voter suppression and protecting the right to vote and added that more attention should be paid to issues around upward mobility for young people and racial justice and healing.

“George Floyd’s murder really exposed our shortcomings,” said Franklin. “And whites, Black, Asians and Latinx Atlantans are really determined to improve the state of intergroup relations, and John Lewis played a key role in that.”

Franklin added: “I have a track record of bringing people together to try to heal and redeem the soul of Atlanta and the soul of America as John Lewis talked about.”

The special race is already crowded with a number of established political figures running for the coveted seat held for more than three decades by the civil rights icon. Still, Franklin said that he is going after every vote.

“My track record is having a presence and working across all boundaries and leveraging a diverse network” he said. “I am hoping that will translate into an electoral victory.”