Just days after reopening for the fall semester and cautiously bringing their students back to campus during a still-raging coronavirus pandemic, some historically Black universities in New Orleans are now bracing for a major hurricane named Laura that’s expected to make landfall Wednesday along the Gulf Coast. 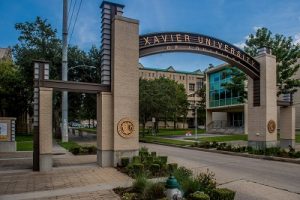 Tropical Storm Marco made landfall on Monday and eventually lost its punch. Trailing Marco was Hurricane Laura, which picked up steam on Tuesday and was categorized a major hurricane. But ahead of the storms, hybrid learning at both Xavier University of New Orleans (XULA) and Dillard University moved to an all-virtual format, students hunkered down, daily alerts were dispatched, and emergency preparedness plans that were fined tuned months ahead of the region’s hurricane season that usually begins in June, were rolled out, campus leaders told Diverse.

The first mention of the impending storms, “was something that caused us to jump into crisis mode,” recalls Eddie Francis, a Dillard spokesperson. But this time around, emergency planning at Dillard had to consider COVID-19 and the possibility of evacuating and transporting students who were infected with the coronavirus, said Dr. Roland N. Bullard Jr., who leads Dillard’s emergency management team and serves as vice president for student success. He said if needed, evacuation plans include charter buses to move students to higher ground “as well as housing and feeding them during that time. One of the additional considerations this year is transportation that allows for social distancing.”

Dr. C. Reynold Verret , XULA’s president, says he and his team are watching and tracking the storm as the world watches New Orleans and the Gulf Coast. In the meantime, says Verret, an emergency plan is in place, and there are supplies and food to take care of students. And unless the campus loses electrical power, Verret says classes for XULA students will continue virtually this week.

Despite distractions — the impending storm and keeping students safe during a pandemic — Verret and others at institutions near the Gulf Coast were remembering the 15th anniversary of Hurricane Katrina. The deadly storm plunged much of their campuses under water, swallowed treasures and upended the lives and learning for many of their students and faculty. It took Dr. Mona Lisa Saloy, the Conrad N. Hilton Endowed Professor of English at Dillard, decades to recover — and get back to campus.

“I lost everything,” says Saloy, a native of New Orleans who was an English professor at Dillard in 2005 when Katrina struck. “It took me 16 moves, 14 ½ years and 12 addresses to get back home. What I experienced wasn’t uncommon,” adds Saloy, who lived just 5 minutes from the campus that was left under more than 10 feet of water.

Verrett points out that this anniversary of Hurricane Katrina was preceded by two storms that both touched down in the Gulf of Mexico this week — the first time in history. But even as he looked back at the devastation and loss left in Hurricane Katrina’s wake, Verrett says he sees a university that “has recovered very well” and has emerged “strong and vibrant.”

The Road to HBCU Self-Sustainability