As the coronavirus pandemic continues, for-profit colleges stand to benefit as some increase their advertising and enrollment efforts, touting online programs that could draw the newly unemployed.

But advocates for veteran education fear this is bad news for service members and veterans, who are historically targeted by for-profits that have poor graduation rates and high levels of student debt.

COVID-19 “will definitely be an opportunity for for-profit schools to capitalize on high unemployment, on people who may have delayed their educations in order to take job 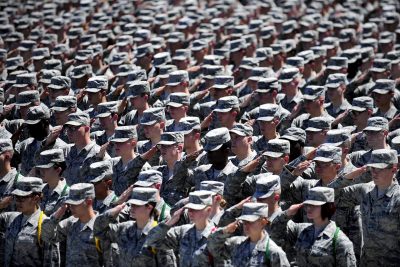 opportunities that might not exist anymore and see this as a chance to finish their educations,” says Aniela Szymanski, senior director for legal affairs and military policy at the nonprofit Veterans Education Success.

Amid the pandemic, for-profit colleges appear to be expanding. For example, Ashbury University — which only graduates 25% of its students — announced it would hire 200 new enrollment advisors in response to rising interest from prospective students. Capella University, which has an 11% graduation rate, also reported an uptick in enrollment, The New York Times reported, as did Strayer University, which is owned by the same company.

But now, there’s not only high unemployment but a “huge incentive” for students to embark on the kinds of all-online programs many for-profits offer, as people find themselves stuck at home without work and without childcare, says Szymanski.

The need for flexibility

For active duty service members, flexible online programs have always been attractive, says Henry Stoever, president and CEO of the Association of Governing Boards of Universities and Colleges, because balancing active duty and classes can be “very hard.”

When he served in the U.S. Marine Corps, for example, he had to drop out of a graduate program because he was deployed to Saudi Arabia and then Kuwait. It wasn’t his or the school’s fault, he adds, but he couldn’t finish his studies at the time.

“Military people don’t work nine to five,” he says. “They work very long hours, sometimes in the middle of the night. Their calendars and their schedules are very challenging, and they’re not known well in advance.”

But it’s not just that the appeal of non-profit colleges is growing. So is their advertising. A report by the digital marketing firm Kivvit titled, “Higher Education Digital Advertising Trends in the Age of COVID-19,” found that for-profit institutions ramped up their spending on advertising during the pandemic.

And their marketing costs were already significant. A Brookings Institution study, published in May, showed for-profit colleges accounted for 40% of higher education spending on ads in 2017, while serving only 6% of students.

Szymanski similarly noticed an uptick in Facebook ads from for-profit colleges during the pandemic, with a theme of featuring people in uniform and people of color.

For-profits are known for advertising to service members and veterans because of a technicality in federal law, called the 90/10 loophole. They can legally get 90% of their earnings from Title IV funds, which includes federal student aid, but 10% of their money has to come from elsewhere.

GI Bill funds and Department of Defense Tuition Assistance don’t count as government funds under Title IV. So, enrolling service members and veterans is an easy way for for-profits to meet their 10% requirement, while still relying on federal funds. For every veteran or service member a for-profit college enrolls, it can onboard nine students paying with federal funds.

The problem is, if the majority of a college’s funds come from federal sources, its leaders may feel less accountable to students and lack incentive to offer quality credentials accepted by future employers.

“In order for them to care about the quality of education, they need to have a reason to get people to pay tuition,” she says. “Right now, they have no reason to get people to pay tuition. They just have a reason to seek out GI Bill funds. It’s created this almost vortex … it’s created the perfect situation where they never have to improve the quality of their curriculum or instructors or outcome measures because they don’t need to if they can just get GI Bill users.”

Szymanski has heard students complain that they weren’t hired because of curriculums that left them unprepared or used outdated techniques or technology for their field.

For-profits and the Trump administration

Meanwhile, during the pandemic, the Trump administration has continued to stymie attempts to keep the for-profit higher education sector in check.

In May, President Donald J. Trump vetoed a bipartisan bill that would have overturned regulations that make it harder for defrauded students to pursue debt forgiveness, despite protest from veterans’ advocacy groups. Two months later, the Department of Veterans Affairs decided to again allow two for-profit colleges — the University of Phoenix and Perdoceo Education Corp. — to enroll GI Bill students, after blocking them from doing so in March because of deceptive advertising.

The schools were hit with penalties by the Federal Trade Commission last year, including a $191 million settlement with the University of Phoenix for falsely suggesting to students that it offered job connections at major companies like AT&T, Yahoo!, Microsoft, Twitter and The American Red Cross.

The University of Phoenix praised the Department of Veterans Affairs’ decision, saying the institution “respected that student veterans have earned the right to choose the institutions that best fit their needs, and this news vindicates that principle.”

To Stoever, it shouldn’t matter whether a college has a nonprofit or for-profit model. It’s about shared governance. In his work with university boards, he sees it as their duty to ensure administrators are accountable to students and listen to faculty, irrespective of the funding structure. He’d like to see policies that make it easier for service members to stay enrolled, even if they’re deployed mid-program like he was.

“A for-profit has shareholders, or investors, whereas a nonprofit or a public board doesn’t have investors in the traditional sense …,” he said. “They have investors called parents and students who are spending money. At the end of the day, it should not change the board’s priorities around academic quality, student success and workforce preparation.”

For Szymanski, the only long-term solution to predatory advertising practices toward veteran students is to get rid of the 90/10 loophole.

But, in the meantime, as the pandemic continues, she thinks policymakers need to collect more data so they know if for-profit colleges are investing in the student supports they need to properly educate the surge of students their marketing could bring.

“I can’t tell you how many students we talk to that are just heartbroken that they joined the military in order to get this benefit,” she says. The GI Bill is often “one of the primary reasons they have joined, which is to make sure they can get ahead in life and get an education and be debt free and further their status and help their families.” But to “then end up worse off than before they joined the military. That is not a situation you want to see anybody in.”