A Central Michigan University (CMU) professor who was placed on paid administrative leave for using the n-word is allegedly no longer an employee at the school, reports Michigan Live. 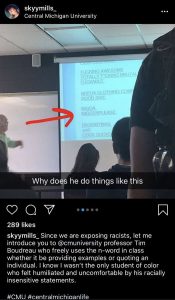 that the school had removed his name from its website and that the campus newspaper had reported he was no longer employed there. According to the school paper, the interim dean at CMU’s College of the Arts and Media had sent an email to journalism faculty explaining that Boudreau was no longer an employee.

An investigation into Boudreau’s use of derogatory language was launched after CMU alumna Skyler Mills posted a nine-second video on her Instagram account in which Boudreau is heard saying the n-word twice in his classroom. Mills also posted a photo of Boudreau next to a projected document that features two racial slurs. In a caption over the picture, Mills wrote, “Why does he do things like this.”

According to Mills, the video was filmed during a 2017 media law lecture on “Hate Speech and Speech Codes at Universities.” As part of the lecture, Boudreau was quoting what had been said by former CMU men’s basketball coach Keith Dambrot, who was fired in 1993 for his use of racial slurs and later sued CMU, alleging that his First Amendment rights had been violated.

Michigan Live could not reach Boudreau for comment. Meanwhile, the school reiterated to the publication that it “could not speak to personnel matters.”