The White House Initiative on Historically Black Colleges and Universities (HBCUs) will hold its first virtual conference this year and registration is free and open to the public.

The five-day gathering which kicks off on Monday, Sept 21st—the start of National HBCU Week—is titled, “The Perfect Decade to Accelerate HBCU Competitiveness,” and will bring public and private partners together with HBCU thought leaders to best strategize on how to grow these institutions over the next ten years. 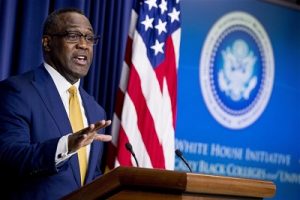 Johnathan Holifield, executive director of the White House Initiative on HBCUs, speaking at the annual conference.

Diane Auer Jones, Principal Deputy Under Secretary at the U.S. Department of Education will discuss C.A.R.E.S Act funding and the continued challenges that many public and private HBCUs have faced in the wake of COVID-19.

Because so many HBCUs enroll students from low-and moderate-income household and communities, these institutions have been greatly impacted, said the United Negro College Fund, which added that many students lacked laptops or tablets and access to broadband internet access once they returned home. Additionally, food and housing insecurity are other issues that have impacted many of these institutions.

Since its creation, the annual conference has been a destination space for those concerned about the plight of HBCUs, regardless of whether Democrats or Republicans occupy The White House.

“The White House Initiative on HBCUs annual conference has long been an important event for the gathering of HBCU presidents, supporters, federal representatives, policymakers, and funders to learn more about the key issues that HBCUs face, to generate new ideas to sustain these vitally important institutions, to amplify the voices of HBCU leaders, and to raise the profile of HBCUs,” said Dr. Marybeth Gasman, the executive director of the Samuel DeWitt Proctor Institute for Leadership, Equity, & Justice and the Center for Minority Serving Institutions at Rutgers University.

“I am glad that it is being held virtually and not cancelled given the importance of HBCUs; there is a great momentum around HBCUs right now and it’s a wonderful time to capitalize on this momentum and further center HBCUs,” said Gasman, an expert on HBCUs. “I hope more people will tune in to the virtual event and learn more about the contributions and importance of HBCUs.”

Dr. Robert T. Palmer, a professor at Howard University says that The White House Initiative on HBCUs provides HBCU stakeholders an opportunity to learn about best practices and to celebrate the uniqueness of these institutions.

“The convening is even most important today, considering the racial climate of the country,” said Palmer. “Hopefully, HBCU leaders can use this as an opportunity to forge a stronger partnership among each other to address systemic racism in America that has been exasperated under Donald Trump’s presidency.”