The Columbia University Marching Band has voted to disband on Saturday evening after 116 years of performing, making controversial jokes, and disputing with Columbia’s administration and students, The Columbia Spectator reported. 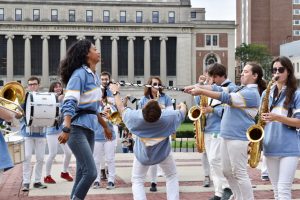 Efforts to disband the marching band began when former and current members penned a letter to the club’s leadership, calling for the club’s dissolution because “alleged traditions of misconduct were too steeped into the band’s culture and reformation could not remove the traces of the harm those practices caused.”

The leadership – called the Bored – responded with a Sept. 2 statement that admitted that the club “has very serious problems when it comes to racism, sexual assault, and alcohol culture.”

“The current Band hopes that the Band’s dissolution will provide relief to the present suffering of the Columbia community and time to heal from the decades of harm caused by this organization. We also hope that the CUMB’s disbandment can create a space that allows for the formation of a new spirit group that will provide a safe and inclusive outlet for students to play music at Columbia,” the Bored wrote in a statement.