The publisher of  Dr. Jessica Krug – the White academic who revealed she had pretended to be Black for years – says all proceeds from Krug’s book, Fugitive Modernities will go to a fund supporting Black and Latinx scholars, The Guardian reported.

Krug – a White Jewish woman from Kansas and former professor focusing on imperialism, colonialism and African American history at George Washington University (GWU) – admitted online earlier in September that she had “assumed identities within a blackness that I had no right to claim.” 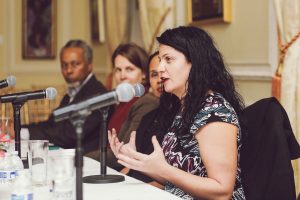 Duke University Press published Fugitive Modernities in December 2018, but Gisela Fosado at the Press has criticized how Krug used “gross racial stereotypes to build her fake identity” and “self-righteous policing of racial politics within the Black and Latinx circles that she intruded upon.”

Fosado said that although Krug’s book was not profitable, the publisher was “committed to moving all proceeds from the book to a fund that will support the work of Black and Latinx scholars.”

“There is the personal pain of having someone impersonate your own identity in the most racist way possible, through caricatures and stereotypes,” she wrote on the press’s website. “There’s also the shameful sense that, as someone who laboured to support her work as her acquisition editor, I helped publish the work of someone who, early in her career, took funding and other opportunities that were earmarked for non-White scholars.”