Utah State University announced a new admissions policy on Wednesday, aimed at increasing access for students who lack the grades or test scores to normally be considered. The Earned Admission program will guarantee first-year applicants a spot at the university if they pass three self-paced courses in English, math and study skills.

The goal is to give these students an alternate way to show their college readiness and to give them an academic boost ahead of enrollment. 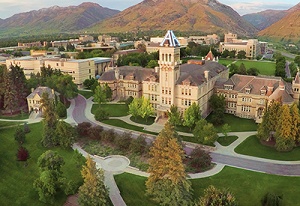 “Utah State is a land-grant institution for the state of Utah, so one of our primary missions is access,” said Katie Jo North, Utah State University’s executive director of new student enrollment. “We’re able to say, ‘You know what? Why don’t you show us that you’re ready to come to school,’ and we made a really easy process for them to be able to have those opportunities.”

The university developed the three entrance classes in partnership with StraighterLine, an educational company that creates online higher education courses. To participate in the program, future students pay $125 a month, and they can finish their classes at any pace they choose, though on average, they complete them in about 40 days, said Burck Smith, CEO of StraighterLine. The classes include access to live tutoring, student advisors and a coaching service. Once students pass, they’re enrolled at Utah State University for the subsequent semester.

The idea of “risk reduction” is baked into the model, Smith added. If an underprepared student drops out of college, that’s a “black mark” on his or her transcript, but in their StraighterLine courses, they can “stop and start as they see fit” in a “highly supported” environment – and then they’re guaranteed college entrance at the end.

Utah State University faculty and administrators vetted each of the courses, so North is “really confident” that the new program won’t change the school’s admissions standards.

“It doesn’t lower our admissions parameters by any means,” she said, “because it is actually having [students] earn that admissions spot. That’s why we called it Earned Admission. It actually gives students the opportunity to show that they are prepared for Utah State rigor.”

Smith finds that these kinds of guaranteed admissions pathways are increasingly popular among colleges and universities. For example, StraighterLine has created similar programs for the Community College of Denver and Indiana Tech.

While it’s early in the trend, “there are lots of these programs that are starting to pop up,” he said, and “you’re going to see more and more of it.”

The coronavirus pandemic may be an “accelerant” for the creation of these pathways, but he’s seen universities implement these programs and recognize their potential for closing achievement gaps before COVID-19 hit.

Utah State University began planning its Earned Admission program before coronavirus disrupted campuses, but the bulk of the program was developed during the pandemic, alongside the school’s new test optional policy.

The pandemic pushes “a lot of different things you’ve been thinking about” into the implementation stage, North said. “These students maybe don’t have the grades and the ACT scores to attend Utah State, but now with Utah State going test optional for admissions, we had the opportunity to look at another route for students to be able to attend.”

While a new pathway could increase enrollment at a time of uncertainty, that isn’t what this is about, North added. At Utah State University, enrollment numbers for incoming freshmen were actually up by about 3% – a welcome surprise.

“Our enrollment is good and I’m excited about where we’re at right now,” she said. “I’m actually really excited because I didn’t know how the pandemic would look [for] enrollment numbers in the end.”

So far, the school has advertised the Earned Admission program to 300 students denied entry last year, and over 30 would-be freshmen are taking advantage of the new pathway this fall. If students finish the courses by Dec. 1, they can enroll in Utah State University in spring 2021.

North looks forward to seeing the program expand, bringing in more students who may see Utah State as out of reach.

“There are a lot of students that once they see the parameters, they don’t even try,” she said. “So, this is now a really good opportunity for students that maybe never had the thought of attending Utah State. We’re really trying to provide access and opportunity in these hard times.”