In a presidential election year, get-out-the-vote efforts on college campuses are typically robust as the fall semester gets underway. The COVID-19 pandemic, however, has significantly altered the landscape. 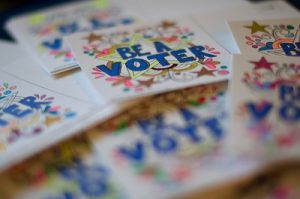 Historically, voter turnout among 18- to 22-year-olds is particularly low. Many voters in that age subset are in college, so voting becomes an issue of mobility, said Bernard L. Fraga, associate professor of political science at Emory University in Atlanta, Georgia.

Due to COVID-19’s effect on campus closures, “there’s just been this big upheaval this semester. You can imagine students register, and then have to re-register again,” Fraga said, as they face the prospect of registering in a place they weren’t planning to vote in or face the prospect of voting for the first time in a way they had not expected.

“Different colleges have different realities,” said Dr. David A.M. Peterson, the Lucken Professor of Political Science at Iowa State University. Yet, “the differences between the parties are striking enough that there is a lot there to motivate people. When the stakes are higher, people are more likely to vote,” which is likely why student voter turnout might be higher (and parallel Obama’s 2008 election), even if the infrastructure of pre-COVID efforts are not fully there, Peterson adds.

Typically, word of mouth is among the most meaningful ways to encourage voter participation, says Louis E. Caldera, distinguished adjunct professor of law at American University Washington College of Law (WCL). Nevertheless, according to Caldera, the get-out-the-vote effort on college campuses “must be thought of as part of the ongoing curriculum and engagement of students to see themselves as civic actors” — not only during an election year or in political science classes alone.

Students are likely to share messages and engage with one another because they know one another, which can boost voter participation, Caldera noted.

That is exactly what Eli Duncan-Gilmour — a sophomore at American University and founding co-president and treasurer at OurVote USA — is doing. OurVote USA is a grassroots movement dedicated to driving youth voter participation in the electoral process.

One of OurVote USA’s latest efforts is its scannable “smart” T-shirts. Anyone can scan the QR code on the shirt, which links to the OurVote USA website, and click: “Register to Vote.” Duncan-Gilmour explained that the shirts collect contact information which OurVote USA uses to send out chain reminders — creating what he calls the “reminder universe.” At the same time, the OurVote USA website and campaigns serve as resources to encourage young voters to vote — which is all part of the “social media universe.”

Today, transitions to an all-digital method of registration and campaigning are now commonplace. TikTok and Instagram are popular social media apps that help mobilize and educate young student voters, both on the voter registration process and on how to vote for Election Day.

An example of just how impactful multimedia get-out-the-vote efforts have become is an initiative founded by Marla Louissaint, a first-generation college student and a first-generation Haitian American in her final semester as a STEM student at Fordham University in New York. Louissaint is the founder of ClaimOurSpace Now (COSpace).

Our collective focuses on “galvanizing with being ourselves,” Louissaint said. “I feel like a lot of organizations have jumped into showing up at the table with a suit and tie. But that’s not accessible to most people. We bring our speaker, we’re listening to music, we’re having a good time. It’s us just truly out in the neighborhood showing that we care and care for them.”

COSpace streamlines and localizes information about voting and the Census. One social media campaign includes the photo campaign called, “ClaimingMyVote” — the campaign allows individuals to express their intersectional reasons for voting today. COSpace also hosts in-person, socially distant “pop-ups,” in which English speakers, non-English speakers and ASL interpreters help the community register to vote, fill out the Census and understand the impact their votes can have.

Nonprofit organizations such as Rock The Vote, The Voter Participation Center, the Student Learn Students Vote Coalition (SLSV) and the Campus Vote Project are among the many efforts to reach the youth in masses as well.

“There’s a big turnout gap between younger people and older people and that gap needs to close in order for young people to finally exert the influence they should have over our elections,” said Fraga.

The Latinx vote, for instance, is a very young population and there may be many first-time voters, Caldera said. One of the concerns is that “there are more steps that you have to take for an absentee ballot than in-person, and potentially,” such steps can be taken incorrectly, leading to “a spoiled ballot that isn’t counted. There’s a higher burden in terms of the education that has to happen in order to have people participate effectively,” Caldera said.

To reach young Latinx, Asian American and Black student voters, both Caldera and Fraga agreed: issues that concern young people should be discussed by campaigns — climate change, immigration, college debt and more. Moreover, these issues and voting efforts need to be talked about at community colleges, noted Fraga.