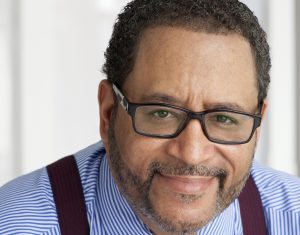 In an interview, Dyson—who is also an ordained Baptist preacher—said that Dr. Tracy Denean Sharpley-Whitting, who is the Gertrude Conaway Vanderbilt Distinguished Professor and chair of the Department of African American and Diaspora Studies at Vanderbilt, was instrumental in recruiting him to the private research university. Sharpley-Whitting served as Dyson’s teaching assistant when he was an assistant professor at Brown University from 1992 to 1994.

“It was because of her that all of this got started and it happened very quickly,” he said, adding that the chance to reconnect with a former colleague, and join an institution that’s doing “some exciting and interesting things,” including “making a concerted effort to really recruit faculty of color, is all a good thing.”

A productive scholar who has authored more than 20 books, including the forthcoming Long Time Coming: Reckoning with Race in America, Dyson is currently the University Professor—holding Georgetown’s highest professorial rank—and is a visible commentator on television.

Dyson’s interdisciplinary approach to scholarship has won him fans both in and out of the academy, as he has engaged diverse topics and subjects ranging from Jay-Z and Tupac Shakur to White supremacy and homophobia.

In announcing his appointment, Vanderbilt’s chancellor, Dr. Daniel Diermeier said that the university was fortunate to add Dyson to its faculty.

“He is a vital and inspiring addition to our community, a scholar with a proven ability to empower students and transform lives through dialogue, analysis and new modes of inquiry,” said Diermeier. “These characteristics lie at the very core of our academic mission.”

Dyson said that the opportunity to hold appointments in Vanderbilt’s College of Arts and Sciences and the Divinity School was a major draw, noting that he began his career early on teaching at Hartford Seminary and Chicago Theological Seminary.

“This is just a tremendous opportunity,” he said. “It’s taking me back to my roots, so to speak.”

Georgetown, he said, was kind to him across the years.

“I had an incredible run at Georgetown,” he added. “Nothing but great things to say, but after almost 14 years, it just seemed like a good time to head South again.”

Dyson is no stranger to Tennessee. He started his college career at Knoxville College, a historically Black school before transferring to Carson-Newman University, also in Tennessee. He later earned a Ph.D. in religion from Princeton University where he was taught and mentored by Dr. Cornel West.

Dr. Emilie Townes, dean of the Vanderbilt Divinity School noted that Dyson’s background as a preacher grants him a “unique and holistic approach to questions of spirituality, individuality and social justice in this modern era.”

Dyson’s social justice leanings will likely be an immediate draw for students who want to grapple with issues of race. At Georgetown—the nation’s oldest Catholic University—Dyson’s  courses would often fill up quickly, with students racing to take a class with the celebrity professor before they graduated. That interest isn’t likely to wane at Vanderbilt.

“The breadth of Michael Eric Dyson’s scholarship is testament to how his approach to learning and discovery truly crosses disciplines,” said Dr. Susan R. Wente, provost and vice chancellor for academic affairs and holder of a Cornelius Vanderbilt Chair at the university. “Welcoming his expansive mindset to our One Vanderbilt culture will expand our work together, and across academic departments, to make the broadest possible impact.”

Dyson’s appointment comes as the university has launched a $100 million initiative to recruit new faculty. Over the next two to four years, university officials will recruit approximately 60 faculty “who are leaders and rising stars in their fields.” Joining Dyson will this academic year will be Dr. Shatema Threadcraft, who focuses on the intersection of race and gender, and author and poet Major Jackson

Dyson’s former teaching assistant, Sharpley-Whitting, said that she is looking forward to collaborating with Dyson more than two decades after they first met at Brown University.

“He was a fabulous mentor then and burgeoning scholar,” she said. “We’ve come full circle and I’m delighted to welcome him to the Vanderbilt community and as a faculty member in African American and Diaspora Studies.”