Tamir Harper, a junior at American University (AU) was sitting and thinking about voting recently and how it ought to be accessible to all, particularly during the height of a global pandemic that has killed more than 200,000 Americans.

Concerned that AU had not cancelled classes, Harper sent the Tweet that “got more traction than I expected,” he said. 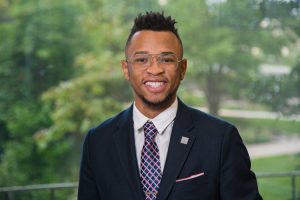 Shortly thereafter, another student started a petition that was followed by an email campaign, and before Harper knew it, AU had announced that it was going to cancel classes and pause services on campus this Nov 3, to allow students, faculty and staff the opportunity to vote in what Harper calls “the most important election of his life time.”

“We pride ourselves on being one of the most politically active schools, so how are we not ensuring that students are able to vote or volunteer at the polls?” wondered Harper, 20, a native of Philadelphia, who was thrilled when senior administrators handed down their decision.

“Our democracy is on the line,” he said. “This election is too important for us to jeopardize anyone’s ability not to vote.”

Come next month, Harper — a junior — will cast his ballot for Joe Biden and Kamala Harris. But getting his college administration to cancel classes so that students wouldn’t have to stand in long line for hours and potentially miss an online course, wasn’t about partisan politics.

In a note to the campus community, AU president, Sylvia Burwell said that the university was founded on the principles of service and was committed to training future generation of leaders.

“AU students, faculty, and staff — changemakers to the core — put their knowledge and purpose to work to make our country and our world a better place,” she said. “And true to that spirit, this fall our students fostered a broad and constructive dialogue about the value of supporting our community by making Election Day a university holiday. We appreciate their engagement and are pleased to arrive at this outcome.”

AU is one of dozens of other schools like Brown University, the University of Utah, and Colorado College that has cancelled classes on Election Day.  Others should follow suit, says Dr. Melanye Price, an endowed professor of political science at Prairie View A&M University.

“It is long past time that we have a voting holiday in this country,” said Price, who is hosting a virtual forum titled, “Voting in the Midst of the Pandemic,” on Tuesday. “If we truly want people to participate in the political process, the easier thing to do is to let voting age adults have the day off to do it.”

Price said that many schools and businesses shut down on Columbus Day, but “I would rather work then and celebrate Election Day.”

In recognizing the heightened political climate and the spate of racial incidents over the past few months, many institutions and corporations have been encouraging civic engagement and made Election Day a holiday. For example, Coca Cola is one of the largest companies to give their employees off for the day. In the higher education space, Walt MacDonald, the president & CEO of Educational Testing Service (ETS)—which develops assessment measures — recently announced that all of their nearly 3,000 employees will also have off on November 3rd.

At Trinity Washington University, the school’s president, Patricia McGuire said that universities have a responsibility to teach about responsible citizenship “including the bedrock importance of informed voting.” The institution will be closed on Election Day but like the holiday to honor Dr. Martin Luther King, Jr., McGuire and others see this day as an opportunity to encourage civic and political engagement.

“Universities must teach students how to understand the consequences of political choices, and how to analyze the impact of political choice on critical issues confronting society, whether teaching the science of climate change, improving economic opportunities for all, researching cures for disease, developing plans to address educational inequities, or framing solutions to combat rising White supremacy and racial injustice among many other issues,” she said. “A university education must instill in every student the desire and talent for active engagement in shaping the governing framework for society, which is the whole point of politics.”