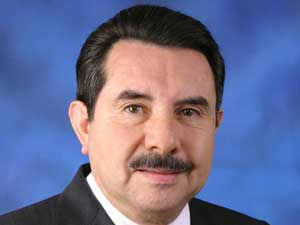 Over four days, the virtual gathering will feature over 50 workshops, divided into six programming tracks that explore themes such as fundraising opportunities, domestic and international partnerships, higher education policy and research and best practices for Hispanic students’ academic success. Meanwhile, students will participate via their own track, the ¡Adelante! Leadership Institute, which offers over 500 students with three days of leadership and professional development training.

In the conference’s opening plenary, HACU President and CEO Dr. Antonio R. Flores acknowledged the unique time in which higher education finds itself, holding a moment of silence for the victims of COVID-19. He emphasized the disproportionate effects of the coronavirus on underrepresented communities.

“The pandemic has impacted terribly the lives of countless people,” Flores said. “It has revealed our horrific social and economic inequalities. It has heightened our rage about systemic racial discrimination, and it has also increased our awareness concerning climate change, which should be called ‘climate disaster.’”

At the same time, he highlighted the pandemic as an opportunity for higher education to tackle these societal ills with new resolve.

“Just as it’s been the case in the past, our country and the world will reinvent themselves in better and more humane ways,” he said. “And higher education will be at the forefront of that renewal, leading the way. 2020 is a year when the worst of times could lead to the best of times in our lifetime and in history.”

Flores asserted that Hispanic Serving Institutions have a critical role to play in that story, describing them as the “backbone of Hispanic success” and as a tool for economic mobility for first-generation and low-income students.

Hispanic Serving Institutions educate about two-thirds of the Latinx students enrolled in college every year, noted Chancellor of the Colorado Community College System Joe Garcia. During the opening plenary, he was inducted into the HACU Hall of Champions, an honor annually bestowed at the conference.

“Our students depend on us, and our future depends on them,” Garcia said.

He argued that it was in government’s interest to invest in these institutions developing “homegrown talent,” especially in employment areas where Latinx workers continue to be underrepresented like science, math, engineering and technology fields.

For Garcia, this “tumultuous” year highlights the importance of educating Latinx leaders not only in higher education but across sectors.

Today’s challenges “call out for thoughtful and well-informed leadership,” he said. Meanwhile, Hispanics make up 20% of the U.S. population and are the fastest growing and youngest demographic group in the country.

“We all know the statistics,” he added. “We provide the labor that harvests our fields, produces our food and operates our factories. However, our power cannot simply be tied to our numbers. Our real power will come when we also walk the halls of commerce and industry, of politics and media, and yes, of our educational institutions, and by gaining access to those places where we once were not welcome.”

Dr. Timothy P. White, the chancellor of the California State University System, expressed his hope in future progress. Like Garcia, he was also welcomed into the HACU Hall of Fame this year. He takes inspiration from his own experience as an Argentinian immigrant bolstered by public education in America.

“Much work remains to be done to improve access, to ensure educational equity, to promote STEM education and to permanently eradicate opportunity gaps,” White said. “But we’ll get there. We won’t rest until we do.”