A recently published Wall Street Journal op-ed asking soon-to-be First Lady Dr. Jill Biden to drop the honorific denoting her Ed.D. has inspired heated criticism from many academics who are calling it sexist, classist and elitist.

The piece, “Is There a Doctor in the White House? Not if You Need an M.D.,” is written by Joseph Epstein, an author who identifies himself as a bachelor’s degree holder who taught at Northwestern University for 30 years. Notably, Northwestern has since distanced itself from Epstein, clarifying that he has not lectured at the university since 2003 and that it disagrees with his “misogynistic views.” 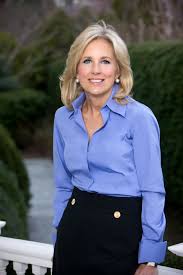 Addressing Biden, who is 69, as “kiddo,” Epstein begins the piece with what he calls “a bit of advice.”

“Any chance you might drop the “Dr.” before your name?” Epstein writes. “‘Dr. Jill Biden’ sounds and feels fraudulent, not to say a touch comic. Your degree is, I believe, an Ed.D., a doctor of education, earned at the University of Delaware through a dissertation with the unpromising title ‘Student Retention at the Community College Level: Meeting Students’ Needs.’”

For Dr. Felicia Commodore, an assistant professor of education foundations and leadership at Old Dominion University, the op-ed brought several age-old but pertinent points to mind.

“The first thing that crossed my mind was that women, and particularly people of color, have to go through this all the time, this argument about whether or not we should call ourselves doctors,” said Commodore.

She described the op-ed as “a temper tantrum of a privileged person.”

“He has a very narrow, privileged and elitist understanding of education,” continued Commodore. 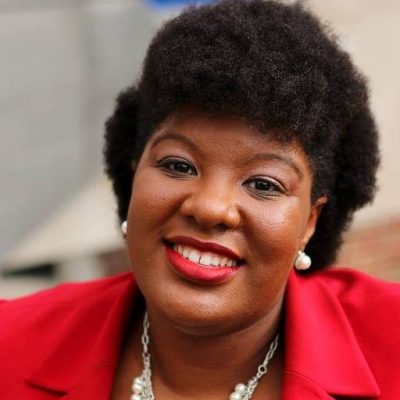 “The idea that anyone can be successful and rise to ranks higher than his own, challenged his idea of what is higher education,” Commodore said. “And when people are challenged or threatened in a way that makes them feel as though the place they thought they had power and privilege is diminished, one of the ways [to respond] is to lash out.”

That same sentiment was shared across social media, with writer and columnist Dr. Virginia Heffernan raising the point on Twitter that honorifics such as “Dr.” take on a new significance for female doctors who may otherwise be “mistaken for housewives.”

Heffernan was specifically jabbing at Epstein’s comment that, although he only held a bachelor’s degree, he was often mistakenly called doctor — a scenario, she argued, that likely wouldn’t happen to women or people of color.

Amid the discourse, the hashtag #mytitleisdr trended, as female academics challenged masculine stereotypes often associated with the title “Dr.” by sharing their experiences in academia.

“I take pride in EARNING my doctorate as a mestiza,” wrote Dr. Maria DeBlassie, an English professor at Central New Mexico Community College, underneath the hashtag. “Graduate school was torture b/c of institutionalized racism & sexism. But walking into a room as Dr. DeBlassie? Priceless. It’s how I disrupt systems of oppression.”

Meanwhile, the Wall Street Journal’s opinion editor Paul A. Gigot responded to the backlash, defending the op-ed as a critique of using the title doctor outside the medical realm, regardless of gender. But for Commodore, Gigot’s argument was rubbish.

“This was not a thoughtful critique of the granting of doctorates in higher education,” Commodore said. “He called a woman — one who has had an impressive career in education, who has advocated on behalf of community colleges and policy — ‘a kiddo.’”

Not to mention that Epstein himself holds neither an M.D. or Ph.D., Commodore added, saying, “It’s just very perplexing. What is the basis of his argument? That would be like me making a judgment of whether or not it’s better to live in Virginia or Vermont, when I’ve never lived in Vermont.”

The dictionary Merriam-Webster further added to the debate by explaining the etymology of the word “doctor,” pointing out that it comes from the Latin word “docēre,”  meaning “teacher” — which Biden is and plans to continue being in a historic decision.

Currently an English professor at Northern Virginia Community College, Biden plans to continue teaching there, which would make her the first FLOTUS to keep a paying job while simultaneously living in the White House and carrying on the roles of the First Lady.

On Sunday, Biden responded to the op-ed, writing, “Together, we will build a world where the accomplishments of our daughters will be celebrated, rather than diminished.”

Apart from the gendered aspect of the op-ed, Commodore said Epstein’s piece brought a second point to mind: “the age-old Ed.D. versus Ph.D. debate, which I think is a little silly, but also indicative of how much people sometimes don’t know … about what these degrees mean, what these programs entail.” 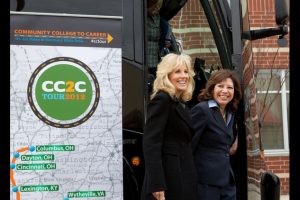 Dr. Jill Biden attends the Community College to Career Tour in 2012 to highlight the importance of community colleges in fostering careers.

At the beginning of his piece, Epstein implies that an Ed.D. — particularly one from a public university — is less laudable than a Ph.D., adding that Biden’s dissertation on community college retention sounds “unpromising.”

“It reeks of classism and elitism, and, on top of that, it was founded in nothingness,” said Commodore. “It really begs the question: do these national platforms really care about publishing quality, thought-provoking conversation around issues that really impact everyday people and impact our communities and education? Or do they just want things that will create clicks?”

The American Education Research Association expressed a similar sentiment in a statement Monday, calling the The Journal’s op-ed “a shameful exercise in the denigration of women, doctoral education, community college faculty, and professionals who advance evidence-based practices and policies through education research.”

“The Journal should have had second thoughts about publishing such an ill-informed, juvenile, and misogynistic piece,” wrote AERA.

For what it’s worth though, Commodore said that the op-ed has, at least, sparked discussions on the value of community colleges, the discipline of higher education and the disrespect women and people of color often face in academia.

“It opens up a conversation to talk about the work that Jill Biden has done and why it’s important,” Commodore said. “What we can do is talk about why community colleges need to be valued and why community college retention is important to the economy and to society. And I believe there’s a conversation to be had about what actually goes on in higher education. Why is it that we study higher education?”

She added: “I think we should bring the focus back to that. The time for giving attention to temper tantrums is over.”

Jessica Ruf can be reached at jruf@diverseeducation.com.