Cass Cliatt: A “Voice in the Room” at Brown University - Higher Education

Cass Cliatt: A “Voice in the Room” at Brown University

Cass Cliatt got an email from a teacher at a predominantly Black charter school in New Orleans, Louisiana. It came with a photo of a bulletin board with her picture on it, next to pictures of the first Black ballet dancer, the first Black governor and the first Black astronaut. Above the pictures, a heading read, “Rise up, you can be next.”

The headshot was from a Brown University announcement that Cliatt would become the institution’s vice president for communications. 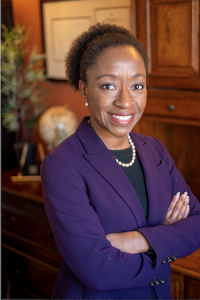 The teacher wrote, “I just want you to know that you’re an example to our students.”

Cliatt tears up when she tells the story. She didn’t know it then, but she’s the first Black person to lead communications at a senior executive level – meaning she reports directly to the president and works with the board of trustees – at an Ivy-League institution, plus Stanford, Duke, MIT and University of Chicago.

She stressed that she has “amazing colleagues who have been doing this job tirelessly at amazing universities for years.” But at that moment, she was reminded that people look to Ivy-League schools as a model, that now people were looking to her as a model.

Now she’s been at Brown for six years. And because she serves under the president, her role brings her into “the room” with university leaders, where her perspective as a Black woman from a low-income background can contribute to their collective work.

“Being in the room at the senior level can be very important as our campuses continue aggressive efforts to be places where students, faculty and staff from historically underrepresented groups feel included and can thrive and succeed,” she said. “I feel very fortunate to be at an institution where I can bring my authentic self into some really sensitive conversations about university positioning, values and actions.”

Usually, a diversity, equity and inclusion officer is in that room too, she said, and their work is “critically important.” While her role is different, she finds it’s also enhanced by diverse lived experiences.

In communications, “the core of our job is to advise and guide our senior colleagues on stewarding relationships,” she said, whether that’s with students, faculty, staff, parents, alumni, federal grant organizations, local community members or state and federal policymakers. She brings her identity to that relationship-building process and to “spaces neither traditionally nor historically occupied by people of my race or background.”

Cliatt described herself as an “evangelist” for the mission of higher education, because she’s seen its transformative effects firsthand. Her parents, descendants of slaves, grew up poor in rural Georgia. They married as teenagers and joined the U.S. Air Force together so their kids would have more options than they had. Her mother went on to get her GED and multiple advanced degrees.

“My parents believed in education,” she said, both for her and her siblings and for themselves. “It was very important to them.”

Cliatt went to Princeton University, marking zero expected family contribution on her financial aid form. She went on to get a master’s in journalism at Northwestern University, where she embraced the same love of storytelling that helps drive her work today.

Higher education is “one of the few areas left, maybe the only area left, in this world … that can be transformative in the life of an individual person,” she said.

After graduate school, Cliatt worked as a newspaper reporter, followed by a stint in communications for a county government, where she dreamed of working for the U.S. Department of Education. In 2005, inspired by her passion for education, she found herself back at Princeton where she served as the university’s spokesperson and went on to lead news and editorial operations. She later became the vice president for communications at Franklin & Marshall College in 2012, drawn by the school’s commitment to creating a K-12 pipeline for low-income and underrepresented students.

It took time for her to embrace bringing her lived experience to her work.

“Early in my career, I saw my job differently than I see it now,” she said. “I thought my job was to be invisible in terms of my identity back then in that first job.”

At Franklin & Marshall College, she started to see the value of bringing her perspective to the role, and three years later, when she came to Brown, “I saw an opportunity to be a voice in the room as my authentic self,” she said.

Now, she feels a sense of responsibility to bring all of who she is to the table. She thinks about the email from that teacher in New Orleans, her picture on the bulletin board of a school hallway.

“That’s how I think about this job now, that I have an obligation,” she said. “We make decisions in life, and we don’t know who’s watching.”