Jaylon Uzodinma knew he wanted to design aircraft since he was eight years old. A kid “infatuated with speed,” he read a book in his third-grade class called How Things Work with a diagram of the inside of an airplane. That was the “first moment” he saw the career path lying ahead of him.

Today, he’s a first-year doctoral student in aerospace engineering at the Georgia Institute of Technology. 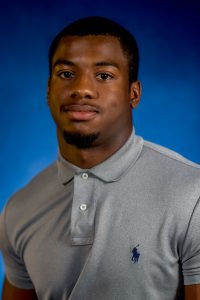 It wasn’t his only option. He also had fully-funded offers from the University of Michigan, Stanford University and the Massachusetts Institute of Technology.

“I wanted to get started in establishing myself as a leader in the field of aerospace,” he says.

Now he’s busy juggling three different projects: one focused on the conceptual design of an advanced aircraft, another on how to curb carbon emissions from commercial aviation and a third on the computer models used in the aircraft design process.

It’s “high stress” but he likes that each project has a “different flavor,” he says. “You have to learn to think in different ways, from different perspectives of aerospace.”

There aren’t many African Americans in the aerospace industry, only 4%, according to 2018 Census Bureau data.

Uzodinma has felt that statistic. Black aerospace engineering professors are hard to come by, and there aren’t many Black doctoral students in his field. A mentor, a Black graduate student at another university, once told him, “You kind of just have to get used to it. You’re going to be the only one in the room quite often.”

Uzodinma wants future students to have the same education options that he had. Throughout his time at Jackson State University, he volunteered as a math and general studies tutor at Blackburn Middle School.

“My first time just interacting with the students, getting to know what they wanted to do when they get older, their dreams, their struggles, it didn’t even feel like community service,” he says.

He found that the kids had a lot of questions for him, and they’d often feel more comfortable asking him than the teacher because he was closer in age, like a “big brother.”

“It gave me purpose, going into a situation like that and trying to pull the most out of each and every student,” he said.

When he came to Georgia Tech, he got involved in the school’s partnership with the Tuskegee Airmen Global Academy, a local elementary school in Atlanta. The collaboration involves student mentoring, live seminars on aerospace engineering and pre-recorded videos for the students who can’t attend, which is what Uzodinma works on by putting resources on YouTube. With graduate students’ help, fourth graders are designing gliders using the concepts they’re learning in school.

Uzodinma also has his own YouTube channel where he’s sharing videos about his graduate school admissions experience and aerospace engineering. He remembers looking at aerospace engineering videos on the site when he was a kid and wants to demystify the process of entering the field for others. Already, he’s received questions from students on social media, even requests to look over their personal statements.

When he hears from students with the same goals he had, “that’s one of the greatest feelings,” he said.

No matter where he goes after his Ph.D. — industry or academia — Uzodinma knows that mentorship will always be a part of his career.

“I would like to encourage any young students out there to not just dream but dream bigger,” he said. “I think a lot of times when we’re eight and nine years old, we have these really, really big dreams… but it seems like when you talk to adults, they don’t dream as big anymore, or they don’t even have dreams. I’m 22 years old right now but I want to continue to dream just like the eight-year-old Jaylon, and I want to continue to set bigger and bigger goals, to continue to chase those goals and help other people chase their goals.”

This article originally appeared in the March 18, 2021 edition of Diverse and is one in a series of profiles about this year’s inaugural class of Rising Graduate Scholars. Read the rest of them here.

Am I Too Diverse for Academia?