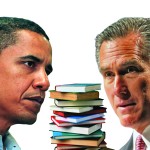 On topics from financial aid to No Child Left Behind, advisers for President Obama and Republican presidential nominee Mitt Romney offered sharply different views on the federal role in education at a joint appearance before a Washington, D.C. audience Tuesday.

Romney adviser Martin West and Obama adviser Jon Schnur conducted a polite but pointed debate about how their candidates would conduct federal education policy beginning in 2013. The Romney adviser said his candidate would shift funding from bureaucrats to child-focused services, while Schnur said Obama would continue a formula for federal investment that includes funds for existing programs and seed money for new innovations.

Through Race to the Top and other initiatives, Obama “has shifted the federal role in education to incentivize new efforts at the state and local levels,” Schnur said. The president also “doubled down” on Pell Grants to help 10 million college students.

Schnur lauded Obama for ending $61 billion in student loan subsidies to banks and redistributing that money to community colleges and student financial aid programs. “This was a revenue-neutral way to shift funds from banks to kids,” he said.

While noting that Romney has no plans to cut education spending, West criticized the president for having no plan to deal with a projected $58 billion shortfall in the Pell program over the next decade. He also chided the White House for short-term solutions on student loan interest rates when long-term answers are needed to stabilize these programs.

As governor of Massachusetts, Romney worked in a bipartisan way to craft affordable solutions that benefit students. If elected in November, “He will do it again,” West said.

Speaking at an American Enterprise Institute forum, both advisers said the federal government has a role to play in education but found little agreement on K-12 issues. Romney would make $25 billion in federal Title I and special education funds portable for students, meaning that families could use the money to help switch schools or pay for extra tutoring and academic support.

Yet Schnur countered that the plan is a “problematic” expansion of the federal role in education. “To have funds follow kids across state lines is an overreach,” he said. Moreover, Title I and special education funding amounts to as little as $700 per child, giving families only limited choices.

On No Child Left Behind, Romney would drop overly prescriptive regulations and focus on providing report cards that grade schools from A to F. “We want to make sure that states are telling the truth about schools,” West said.

Schnur said NCLB’s focus must change from “mediocre” state tests to a system that measures student readiness for college and career.

Elsewhere, the advisers traded barbs on the issue of for-profit colleges. Schnur said the president’s gainful employment rules would promote accountability across all sectors of higher education, not only private career colleges. Yet West countered that the president’s “arbitrary” plan singles out for-profit schools when there are “bad actors” in all sectors of higher education.

The two briefly discussed the Fisher v. University of Texas affirmative action case argued before the Supreme Court this month. The White House supports the university’s limited use of affirmative action in admissions, while most conservatives opposed that policy.

Schnur said Obama values diversity and supports current law to promote equal opportunity. West, who noted that he does not work for Romney full time, said he did not know the candidate’s position on the case.

The public responsibility of Pan-African Studies