Charles Chesnutt Leaves an Indelible Legacy in Hometown and the Nation 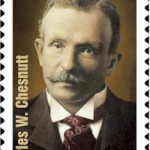 African-American writer Charles Chesnutt was honored with a Black Heritage stamp in 2008.

Fayetteville, N.C. is well known as the home of one of the country’s largest Army bases. Historians and literature lovers may know that the city was also home to America’s first famous Black novelist, Charles Waddell Chesnutt. His works focused on racial prejudice in the country in the late 19th and early 20th century, an issue he knew first-hand and wrote about long before the Harlem Renaissance.

His parents, Andrew Jackson Chesnutt and Anne Maria Sampson, were both free Blacks in Fayetteville. They moved to Ohio to be with relatives before the Civil War and Chesnutt was born in Cleveland. They returned to Fayetteville after the war when Chesnutt was 8. Chesnutt’s father was the son of a White slave-holding farmer and his Black mistress and later housekeeper. Chesnutt’s mother was the daughter of free mulattos in Fayetteville. “He could have passed as White, but he chose not to do so,” said Craig Tuttle, Fayetteville State University Archivist. Life would probably have been easier for Chesnutt if he had chosen his White heritage. But Tuttle notes that through Chestnutt’s adversity as a Black person, he became stronger. “Charles Chesnutt always involved himself in activities that ameliorated African-Americans. He was a firm believer in education,” Tuttle said.

When he was young, Chesnutt worked part time in the family grocery store and attended the Howard School, founded by the Freedmen’s Bureau. Seven local men, including Chesnutt’s father, donated money for the land for the school that would eventually become Fayetteville State University.

In 1872, Chesnutt began a teaching career in Charlotte but returned to teach in Fayetteville. He met and married his wife, Susan, also a teacher. He became principal of the Fayetteville State Normal School for Negroes.

The couple became concerned about racial prejudice and the limited opportunities in the South. They lived in New York briefly, and then moved to Cleveland. There he worked as a stenographer for the Nickel Plate Railroad Company while earning a law degree. Afterward, he started his law practice and also began his writing career.

His first short story, “Uncle Peter’s House,” appeared in the Cleveland News and Herald in 1885. Other stories followed, and he became the first African-American author to be published in the Atlantic Monthly. The Houghton Mifflin publishing firm organized his work into a collection of short stories and in 1899, Chesnutt’s first book, The Conjure Woman, was published. Most of the stories featured slaves who adapted to their lives by often outwitting their slaveholders.

Chesnutt’s second collection of short stories, The Wife of His Youth and Other Stories of the Color Line, focused some on the theme of miscegenation — marriage or sexual relations between Whites and Blacks. In 1900, Houghton Mifflin accepted Chesnutt’s first novel, The House Behind the Cedars. The book’s theme was that people of mixed races should be accepted on equal terms as Whites. Chestnutt’s next novel, The Marrow of Tradition, centered on the Wilmington, N.C., race riot of 1898. It was not a financial success and Chesnutt had to reopen his court reporting business for his livelihood. Tuttle said the reason Chesnutt stopped writing for a living was simple. “His books initially had been successful, but it came to a point that he did not find the same level of success,” he said. One major accomplishment was his biography of abolitionist Frederick Douglass.

Chesnutt continued to write essays and articles about racial issues for little or no pay. He contributed some short stories and essays to the NAACP’s official magazine, The Crisis. During this time many Whites in the South attempted to regain their supremacy legally and economically. Also, the Ku Klux Klan was organizing. Black voting suppression was common, and legal racial segregation continued for generations.

Today Fayetteville State University’s library is named for Charles Chestnutt and contains an impressive collection of correspondence, photos, legal records, the Chestnutt family Bible and other information. The collection draws out-of-state scholars and some from abroad, said Tuttle. The collection also serves as an invaluable resource to FSU students. He adds that these resources “humanize those who have been here before us, showing human failings and strengths.” Chestnutt’s sisters, Anne and Sarah Chestnutt inherited the diaries, letters and other materials after their brother’s death in 1932. The collection was donated to FSU after Anne died.

“It’s an invaluable collection. It provides information on the family and insight into family dynamics, which can be a bit like “Peyton Place,” Tuttle said. He noted that the collection also provided insight into a successful African-American family. “This was a well-educated family who was sophisticated and well-off financially,” said Tuttle. “They are a shining example of how some African-Americans went against the stereotype.”

The Fayetteville State University community celebrated the U.S. Postal Service Charles Chestnutt stamp in 2008. Cousins of the writer were on hand for the unveiling.

Dr. Brookie Harrington, who teaches African literature at Fayetteville State University, said there still remains emphasis on Chesnutt in the classroom. “We try to make sure students know of his legacy,” he said. “There is inevitably talk about the ‘color line’. A lot of mulatto culture is entangled with the Chesnutt lineage.”

Both Harrington and Tuttle say that Chestnutt’s work is not outdated and still translates to today’s times. Said Tuttle, “His contributions and activities as an educator, a writer and a businessman have not been forgotten.”