A Passion from the Philippines: Dr. Ethel Nicdao - Higher Education

A Passion from the Philippines: Dr. Ethel Nicdao 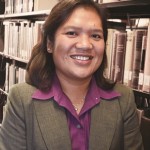 Dr. Ethel Nicdao was a late bloomer when it came to choosing her field. In her junior year at the University of California, Davis, she took a seminar taught by Dr. Debora Paterniti, who was on Nicdao’s dissertation committee at the University of New Mexico years later.

“It exposed me to this very exciting field that I honestly didn’t know existed. I didn’t realize there were other ways to look at medicine and health,” says Nicdao, an associate professor at the University of the Pacific in Stockton.

Her work in medical sociology includes the study of health disparities, mental health, physician and patient interactions, access and delivery of health care services, quality of care and chronic illness. Her research explores low-income rural communities and focuses on Asian-Americans, who researchers say are insufficiently studied by the social sciences.

Her research is connected to her “lived experience,” says Nicdao, whose family immigrated to San Francisco from the Philippines when she was 8 years old.

Whether it is breast cancer among Asian-American women or exploring how culture, religion and language affect responses to diseases among the Hmong in California’s Central Valley, much of Nicdao’s work focuses on examining the differences among the diverse Asian-American population.

“We have a tendency to lump all subgroups into one umbrella. We ignore the differences. We don’t disaggregate the data,” says Nicdao, who is also an associate fellow at the University of New Mexico’s Center for Health Policy.

As a scholar, Nicdao says it is her “obligation and privilege” to work in the community to end social inequality. Her research in the Laotian and Hmong communities in Stockton is a significant part of her work. She has developed partnerships with community-based organizations in the area, connecting her research with their needs.

The Hmong remain largely poor and unassimilated, complicating the ability to address diseases such as breast cancer or type 2 diabetes, of which there is a high incidence in the population.

“You can’t expect to apply a Western modality of treatment. They won’t hear you. You can’t just say we’re going to have this workshop,” says Nicdao, who is partnering with two community organizations in Stockton and Sacramento to develop a culturally and linguistically appropriate model for lay health services for the Hmong and the larger Southeast Asian community. Cultural beliefs and gender roles affect medical treatment, she says. There is no word for diabetes among the Hmong, and taboos about women’s bodies complicate detection and treatment for breast cancer.

Nicdao has co-authored more than half a dozen publications in journals, several of which were co-written with her mentor, Dr. David Takeuchi of the University of Washington. As a postdoctoral fellow, Nicdao studied racial, ethnic and cultural disparities in mental health training under Takeuchi.

“The work she is doing is very community-based and it is difficult to do. It’s so much easier to go in and do a survey right away and get many responses,” Takeuchi says. “But she is committed to a partnership with communities, and the community also gets the answers it needs.”

Emerging Scholars: A Side Trip to the Stars