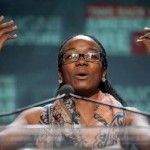 Every encouraging parent has a punch line—words of affirmation, motivation and positive reinforcement—to guide a child toward success. For Tiffany Dena Loftin, her mother’s guiding words were surrounded by humility.

“My mom’s thing that she always said to me growing up was, no matter what opportunity comes, always raise your hand to volunteer,” says Loftin, the current president of the United States Student Association (USSA).

“Anything extracurricular my mom told me to do, I did it,” she says.

While maintaining straight A’s in high school, Loftin ran track and field and was student council vice president, prom queen and a member of the theater club.

When Loftin entered college in 2008 at the University of California, Santa Cruz, her tenacity and involvement increased. During her first week on campus, she attended a student council meeting and inquired about employment opportunities.

“I just came and said, ‘Hey, I got a question, how do I get involved?’ I’m raising my hand, you should pick on me!”

By the end of the week, she had a paid internship with the president of the university.

Throughout her freshman year of college, Loftin soon realized that her extracurricular participation would be cultivated by a deeper drive—one that her mother could never express so personally.

Out of the 17,000 students at Santa Cruz, roughly 200 of them shared Loftin’s African-American heritage. She began to receive notice of hate crimes against Blacks being spread throughout several University of California campuses, including her own—someone tagged a noose in the boys’ restroom on science hill; the student newspaper released a satire with illustrations of stereotypical images of Black women.

“I felt like my community and myself were being personally attacked because those are services that directly affect and help me. And I definitely used all of those people and had relationships with those women who were let go,” she says.

The situations had a revolutionary effect on Loftin.

“It pushed me to be angry, and my anger turned into passion to want to organize and fix some of these problems so that the people coming after me wouldn’t have to deal with those things,” she says.

During this time, Loftin had been volunteering with USSA to push initiatives such as the Federal Dream Act, creating solutions for higher education and citizenship for undocumented students.

She used her connections with USSA and its “The People of African American Descent” caucus, along with the university’s Black student union, to create allies, forming campaigns surrounding social justice issues on her campus.

The platform of USSA alone expanded her initiatives beyond Santa Cruz to touch issues of race relations on campuses across the country.

Throughout her remaining tenure at Santa Cruz, Loftin continued to work with USSA to address the needs of students that were both socially and academically tied.

“While I was trying to get an education, my classes were getting cut, the class sizes were getting bigger, majors were being cut because of budget cuts, faculty were getting fired,” she recalls. “Some of those things can’t just be problems that are education issues; some of them are also social justice issues. Like, if we don’t have Black professors in classes, that’s a social justice issue, but it affects the way that I learn in class and that’s an education issue.”

Another concern among students that has shaped Loftin’s post-graduate efforts are challenges that prevent students from completing school, altogether; many students don’t even get a chance to finish college because of financial constraints. And for those who do graduate, they walk across the stage with mounds of debt.

Loftin, herself, is currently repaying $28,000 in student loans—an amount that could take her more than 20 years to pay off.

In Washington, D.C., she is currently using her student-elected role as USSA president to address higher education reform, tackling the reported—as of April 2012—$1 trillion in student loan debt and outlining ways to make college more financially feasible for future scholars.

To begin, Loftin suggests fixing the way in which loans are processed for students. With interest rates as high as 14 percent, lenders like Wells Fargo are “burdening students and putting them into student debt packages that are the size of houses,” says Loftin.

Further, financial assistance such as Pell Grants, in which Loftin was a recipient, should be fully funded. And, ultimately, ensuring that statewide tuition for college is less expensive can largely supplement the preceding solutions.

Loftin’s life was shaped significantly by her college experiences—good and bad. Now, her mission is to ensure that all youths have the opportunity to pursue higher education—ideally, debt free.

“In my heart, I want education to be completely free. I want it to still be competitive, people still go to school, you still get tests, you still attend classes, you have to study, but at least anyone who wants to go and wants to try, can do it,” says Loftin. “And right now that’s not the case.”