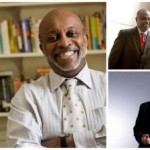 Dr. Earl Smith, Kenneth Shropshire and Richard Lapchick are scholars who look beneath the surface of sports data.

In the third installment of a four-part series, the Diverse editors sought to recognize the scholars and researchers who have helped us understand the social ramifications of sports in terms of diversity and inclusion.

Often, these behind-the-scenes icons are not seeking applause and accolades. Any who stand witness to the positive changes, including unprecedented new opportunities on the diversity front, sincerely appreciate their invaluable contributions to collegiate athletics. Their stellar examples serve as inspiration for the tenacity and fortitude that will be needed in the battles that lie ahead.

We appreciate their advocacy and leadership in the collegiate sports community. Join us as we salute these impactful sports figures who have advocated for and led the charge toward diversity and who have left positive and indelible marks on the world of college sports.

Often described as “the racial conscience of sport,” Richard E. Lapchick accepted an endowed chair in 2001 at the University of Central Florida (UCF). Lapchick became the only person named as one of the “100 Most Powerful People in Sport” to head up a sport management program. He remains president and CEO of the National Consortium for Academics and Sport and helped bring the NCAS national office to UCF.

The DeVos Sport Business Management Program at UCF is a landmark program that focuses on the business skills necessary for graduates to conduct a successful career in the sports industry. The DeVos Program has been named one of the nation’s top five programs by The Wall Street Journal, ESPN the Magazine and The New York Times.

Lapchick helped found the Center for the Study of Sport in Society in 1984 at Northeastern University. He served as director for 17 years and is now the director emeritus.

Also a writer, his 15th and 16th books were published in 2010. Lapchick is a regular columnist for ESPN.com and the Sports Business Journal. He has written more than 550 articles and has given more than 2,800 public speeches. Considered among the nation’s experts on sport and social issues, Lapchick has appeared numerous times on Good Morning America, Face The Nation, The Today Show, ABC World News, NBC Nightly News, the CBS Evening News, CNN and ESPN.

Before Northeastern, he was an associate professor of political science at Virginia Wesleyan College from 1970 to 1978 and a senior liaison officer at the United Nations between 1978 and 1984.

He is the son of Joe Lapchick, the famous Celtic center who became a legendary coach for St. John’s and the Knicks.

Wharton School, U. of Pennsylvania

Combining law and sports, Kenneth L. Shropshire is the David W. Hauck professor at the Wharton School of the University of Pennsylvania. Shropshire teaches legal and business aspects of sports, business law and ethics, negotiation and dispute resolution and diversity and the law.

He is the director and founder of the Wharton Sports Business Initiative, a think tank that generates and disseminates knowledge about the sports industry through educational programs, strategic corporate partnerships, high-level student consulting assignments, global forums and research. He serves as an arbitrator with clients including the National Football League Players Association and USA Track and Field.

His expert views have been presented in The Wall Street Journal, Sports Illustrated, National Public Radio and “Nightline.” A Stanford and Columbia Law graduate, Shropshire previously worked in private law practice and as an executive with the Los Angeles Olympic Organizing Committee.

Shropshire is also special counsel at the law firm Duane Morris LLP, practicing in the area of corporate law with a concentration in sports and business law.

Bestowed with the Rubin distinguished professorship in American ethnic studies at Wake Forest University, Dr. Earl Smith is an emeritus professor of sociology. Smith specializes in the areas of urban sociology, race and ethnic relations, sociology of sport and social stratification.

He is the author of dozens of articles, book chapters and books, most recently Race, Sport and the American Dream (2007; 2009), Sociology of Sport and Social Theory (2010), African American Families Today: Myths & Reality (2012).

Smith has focused his teaching and research on urban sociology, criminology, race and ethnic relations, family, and the sociology of sport.

In 2011, Smith was one of the organizers of “Losing to Win: Discussions of Race and Intercollegiate Sports,” the third major interdisciplinary conference held since 2009 at Wake Forest.

The conference brought together an unprecedented team of experts to examine the racial implications of many of the most important topics pertaining to college sports. The two-day conference featured prominent academics, athletic administrators, sports journalists, former student athletes, professional athletes and other professionals who have developed an expertise in the racial implications of college sports.

A Quick Rebound? Not So Fast