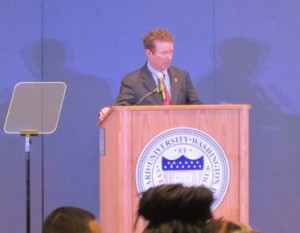 WASHINGTON — Invoking the historic affinity African-Americans had for the Republican Party between the Civil War and the Civil Rights Movement, U.S. Senator Rand Paul, R-Ky., told a packed audience at Howard University that the party today offers Americans a path toward unencumbered opportunity. The Democratic Party approach to governance, instead, has led to greater poverty, increased national debt, and high unemployment, he said.

“If you are struggling to get ahead, if you have school loans and personal debt, you should choose a political party that wants to leave more money in the private sector so you will get a job when the time comes,” Paul said Wednesday during his speech at the Howard University School of Business.

Just weeks after Republican Party leaders identified historically Black colleges and universities as institutions at which the party can reach African-Americans “with the goal of educating the [Black] community on Republican ideals and the Party’s history,” Paul delivered a timely appeal to an audience consisting largely of Howard students. Last month, the Republican National Committee unveiled the 97-page “Growth and Opportunity Project” report that had been commissioned to outline a new strategy for the party, including urging the party to conduct outreach efforts at HBCUs.

“I hope that some of you will be open to the Republican message that favors choice in education, a less aggressive foreign policy, more compassion regarding non-violent crime and encourages opportunity in employment,” Paul told the students.

With the Republican Party struggling to attract Black voters, Paul pitched the idea that the party’s free-market economic policies have more to provide than federal assistance offered by Democrats. “The Democrats promised equalizing outcomes through unlimited federal assistance while Republicans offered something that seemed less tangible—the promise of equalizing opportunity through free markets,” he said.

“Now, Republicans face a daunting task. Several generations of Black voters have never voted Republican and are not very open to even considering the option. The Democrat promise is tangible and puts food on the table, but too often doesn’t lead to jobs or meaningful success,” Paul contended.

Paul also acknowledged controversial statements he made about the Civil Rights Act of 1964, when he questioned the section of the bill that made it a crime for private businesses to discriminate against individuals on the basis of race.

Paul’s “inclusion in the Republican Party” speech was billed as one to “focus on the importance of outreach to younger voters, as well as minority groups,” and “to discuss the history of the African-American community’s roots in the Republican Party and current issues, such as school choice and civil liberties,” according to a Howard University statement.

Paul, whose Republican Party beliefs are rooted in libertarian philosophy, noted that he was said to be either “brave or crazy” to visit Howard, especially since young Black voters are documented to have supported President Obama over Republican Party candidate Mitt Romney with more than 90 percent of their vote in last fall’s election. At one point, a pair of hecklers interrupted Paul’s speech by unfurling a banner that read, “Howard University does not support White supremacy.” Security officers apprehended and removed the hecklers from the auditorium.

The audience largely listened with quiet during the Paul speech and applauded him for mentioning that he has sponsored legislation to do away with mandatory minimum prison sentencing. Mandatory minimum sentencing has been blamed for the massive incarceration of African-American men for nonviolent drug offenses. During a question-and-answer session with Paul, audience members asked questions that raised criticisms of the senator over a number of issues, including Paul’s role in District of Columbia oversight and his stances on the Civil Rights Act and the Voting Rights Act.

Judy Lubin, a Howard University doctoral student in sociology, said she appreciated the effort by Paul to visit and speak to Howard University students. Paul’s assessment, however, that the 19th and early 20th-century Republican Party, which was supportive of Blacks, is fundamentally the same party in the 21st century proved highly unconvincing to Lubin.